You'll tak the high road, and I'll tak the low
And I'll be in Scotland afore ye
But me and my true love, will never meet again
By the bonnie, bonnie banks of Loch Lomond

William and Dorothy Wordsworth arrived at Inversnaid on Loch Lomond after a journey on foot from Loch Katrine. They had come to see the country made famous by Walter Scott, but - as is not uncommon on the west coast - were soaked to the skin. Yet if their spirits were dampened by the climate, the people enchanted them, and one in particular:

Sweet Highland Girl, a very shower
Of beauty is thy earthly dower!

wrote William of the lass who had served them at Inversnaid. The impression of rustic innocence and beauty confirmed their romantic ideals that the Highlander was a better class of person, naive in the best possible way. (When James Hogg was tasked by the Highland Society of London in 1817 to publish a collection of Jacobite songs, he disappointed them by producing a collection of actual Jacobite songs from the first half of the 18th century - the Society found these lacked the required fashionable sentimentality, and the eventual publication Jacobite Reliques contained songs mainly written in English well after 1745.)

The Wordsworths were not the first people who had come to Loch Lomond for the scenery. The rational age brought factories, machines, railways - and a subsequent reaction in the pan-European picturesque movement, where travellers carried empty picture frames to help them contemplate waterfalls and other untamed features of a sublime nature. Lowlanders thrilled to Sir Walter Scott's tales of the fierce MacGregors, whose cattle raids and extortion rackets were now safely in the past, and tourists inspired by Scott were brought to Loch Lomond and the Trossachs in their coachloads by Thomas Cook. The Trossachs became a tourist magnet, with handsome facilities in the gothic style built to expedite their comfort in this accessible wilderness.

Only eighteen miles from Glasgow, Loch Lomond remains the most popular of Scotland's lochs: on sunny summer Saturdays it can seem that half the population of the city has decanted for a daytrip to her shores, especially around the villages of Luss and Balmaha, between which the loch is broad and shallow and dotted with wooded islands. Loch Lomond was long the most deserving case in Scotland for a national park - finally legislated for in 2002 by the new Scottish Parliament. (Scotland's long wait for a national park is one of those ironies, given the concept was instigated by an emigrant Scot, John Muir, in Yosemite & Yellowstone in the USA in the 19th century.)

Near Loch Lomond lurk Britain's nuclear submarines and Helensburgh, unique for its mixed population of naval personnel and well-to-do commuters who work in Glasgow. The town was built with the coming of the railways as a commutable seaside home for Glasgow's captains of industry, and you are as likely to see yachts in the driveways of the town's villas as cars. The most famous of these big houses is Charles Rennie Mackintosh's Hill House, and other houses along the coastal road were designed by Greek Thompson. However Helensburgh's main contribution to society must be as the birthplace of John Logie Baird,     inventor of television.

Inventions
In the years between 1750 and 1950 Scotland produced a catalogue of innovators - Alexander Graham Bell, inventor of the telephone, came from Edinburgh, as did Alexander Fleming, discoverer of penicillin. The renaissance inventor of logarithms and decimal points came from Edinburgh, and we have already mentioned in passing James Watt (steam engine) and Kirkpatrick Macmillan (bicycle). The inventors of tarred roads, and pneumatic tyres, and radar, and fountain pens, and the Bank of England, and the cure for scurvy, and the cure for malaria, and the US Navy, and the unified theory of electromagnetism - all were Scots - as were numerous pioneers, explorers and missionaries in Africa, Australasia and America, plus philosophers and economists. In fact all this is the subject of a chauvinistic teatowel available in tourist shops! So what enabled Scots to contribute so much in that period? I suspect that a combination of three or four factors - the Calvinist cult of work and investment, a historically early emphasis on universal education, top quality practical universities, and the union with England bringing internal security, organisational networks, and huge untapped markets and territories abroad - helped Scotland flourish at this particular time.

Back at Loch Lomond but away from the southern end, the hills crowd the narrowing shores and the scene becomes definitively Highland. Along the eastern bank the loch is roadless and a fine wild path - the West Highland Way between Glasgow and Fort William - clings to the shore. In the times before the Highlands were tamed this was bandit country, within easy striking distance of the rich farms of the Lowlands. The most notorious of all the Highland clans - the     MacGregors - lived here.

The MacGregors
In fact, the MacGregors were one of the most persecuted clans in Scotland. They won a battle in 1603 against the Colquhouns which started over a dispute about a stolen sheep, but the Colquhoun chief made a dramatic representation to the king in Edinburgh, the wailing mothers of the slain carrying their bloodstained clothes into the royal presence. This made a powerful impression on squeamish James VI and he outlawed the very name MacGregor, on pain of death. The people took on names of neighbouring clans, but it was hard on them to have their weapons confiscated and to be barred from congregating in large numbers. Some continued as they were, fleeing to inaccessible parts of the Highlands such as Rannoch Moor and, being denied the opportunity to raise crops or cattle, became hardened bandits of legendary ferocity, even amongst other Highland clans. By the time of the famous Rob Roy MacGregor, things were a little easier, and with the improvement of roads and building of bridges and barracks by the British army in the 18th century, the entire country finally came under central government control.

The area inhabited by the MacGregors, the Trossachs, is a fairly rugged stretch of country between Loch Lomond and Stirling, an area of lochs, forests and small glens, built on a slightly smaller scale than the rest of the Highlands further north. The outlook from the Trossachs is back to the Lowlands and, from any hilltop, Stirling castle on its rock can be seen. 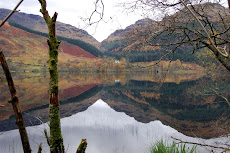 Looking towards Glasgow from Ben Lomond on Boxing Day

The Hillhouse in springtime 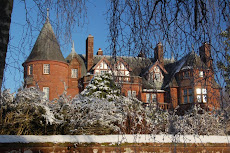 Nuclear Sub in the Clyde 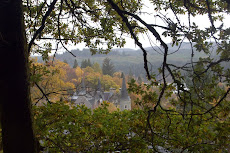 Autumn at Loch Ard in the Trossachs