Westering home, with a song in the air
Light in my heart, and it's goodbye to care
Laughter of love, and a welcoming there,
To find yourself nearer to Islay

From Galloway, you can cross to Ireland. A short distance along the Irish coast, a summer ferry allows you to hop back over the sea to Campbeltown in Kintyre, which in today's road-based society is Britain's longest dead-end. The Mull of Kintyre feels a long way from anywhere, and Campbeltown more like an Antrim town than a Highland one. But any Irish atmosphere should not be surprising: for millennia the sea was the main highway, and Ireland and Argyll have long and enduring links. The very name of     the Scots originally described Irish tribes, who at first occupied only this corner of Scotland, nowadays known as Argyll. To me it is as close as we get in this country to heaven on earth. Although lacking the desolate grandeur of the best Highland scenery further north, Argyll's innumerable bays, islands, sea lochs, fine beaches, ruined castles, and unsurpassable history make it the most compelling place in Scotland.

The Scots
Since Roman times, the people on either side of the Irish sea have been interchangeable. Whilst Picts inhabited most of the country north of Hadrian's Wall, Irish Gaels (known by the Romans as Scotti) were already living in Argyll. Around AD 500 Fegus Mor mac Erc moved his seat of power from Antrim to Argyll, ruling a coastal kingdom called Dalriada with its roots in Ireland. The dynasties of Gaelic Scots fought, allied, and intermarried with the Picts, and by 800 the families of Cenel (clan) Loarn had become associated with the northern Picts in Moray, and the families of Cenel nGabhrain with the southern Picts around Perth. (The ancient Perthshire district of Atholl may be a very early example of colonial place naming, Ath Fotla meaning New Ireland in Gaelic.)

Through intermarriage of dynasties, the Kings of Picts became Kings of Scots around 830, and within fifty years Dalriada and Pictland were being ruled as one country, Alba. The Picts were the more numerous people, but Gaelic language became dominant, and later Scottish kings preferred to trace their ancestry back through the Dalriadan rather than Pictish line. For this reason alone the country's name is Scotland, not Pictland.

To the west of Kintyre lies the fertile island of Islay which, thanks to the sale of her peaty malt whiskies, must raise more money per person for the Exchequer than any other part of the country. Despite hosting iron-age forts, a heavily decorated ancient Celtic cross at Kildalton, and a circular church at Bowmore (so the devil had no corners to hide in), Islay's most intriguing historic building sits away from the coast, on a pair of small islands in a freshwater loch. This is Finlaggan, now an unimpressive ruin, but once the administrative base of the     Lord of the Isles, a semi-independent ruler whose kingdom stretched from the Isle of Man to the Butt of Lewis. Paradoxically, Finlaggan's ordinary, unfortified appearance reflects the Lord of the Isles' power. When the rest of Scotland was dotted with castles and tower houses, no one could approach Islay without the consent of the Lord of the Isles, whose strength lay in his fleet of longships.

Lord of the Isles
The Norse settled in the islands through the Viking period, intermarrying with the locals, creating a Gaelic speaking mix known as Gall-Gaels (stranger Gaels). The Lords of the Isles sprung from this stock, and to the frustration of the Norwegian king, men such as 9th century Ketil Flatnose became a law unto themselves, forgetting their loyalty to a distant throne. The fortunes of the Lordship waxed and waned, but in 1158 Somerled reunited the isles from the Butt of Lewis to the Calf of Man. Somerled was the progenitor of the MacDougall and MacDonald clans, and by the middle of the 13th century, Haakon IV of Norway had confirmed Angus Mor MacDonald as Lord of Islay. Angus Mor switched allegiance to the Scottish king after the Battle of Largs. His successor Angus Og supported Robert the Bruce, cementing the MacDonald's position as a powerful family in Scottish affairs.

The Lordship of the Isles fell into the hands of the most powerful clan in Highland history - the MacDonalds. Angus Og MacDonald had a good relationship with Robert the Bruce, hiding him during his lowest ebb in the winter of 1306/7 on Rathlin Island. However future Lords displayed an independent streak that later Scottish kings were determined to crush. The final straw was a secret pact to divvy up Scotland between Galloway's Earl of Douglas, Edward IV of England, and John MacDonald of the Isles, discovered by James III in 1475. John's submission to James proved to be the beginning of the end of the power of the Lordship. But the West Highlands were too rugged to be ruled effectively by central government in Edinburgh. The resulting power vacuum led to a period of endemic clan warfare that retained echoes as late as 1746.

Nowhere is the idiom that 'every Scottish island has its own unique character' more starkly illustrated than in the contrast between the neighbouring islands of Islay and Jura. Where Islay is green and prosperous, Jura is a brown, hilly wilderness, the majority of the tiny population living in the hamlet of Craighouse near the southern end of the island. It is a long way along a single track road, then rough track, to the northern tip of the island, where George Orwell came for peace and quiet to write his final masterpiece, 1984. Off the very northern tip of the island lurks Corriebhreachain, the second largest whirlpool in the world, the only stretch of water around the British Isles classed on admiralty charts as unnavigable - although a wily sailor with an eye on the wind and tide can sail safely through under the right conditions. The northwest of Jura is a place for the outdoor lover: a strong and self-sufficient walker can enjoy an expedition along the cliffs and caves of the coast, build a driftwood campfire, sample a Jura malt, and drink in the sunset views to Mull and Jura's mountainous interior.

Back on the mainland, enchanting Kilmartin Glen boasts a density of prehistoric remains as high as Orkney or Salisbury Plain. Over 150 monuments dot a few square miles, from standing stones and cup and ring marked rocks, to stone circles (including my favourite, the zen-like clearing of Templewood) and burial cairns. Dunadd, the central citadel of the ancient kingdom of Dalriada, rises above the glen, a boar and coronation footprint carved into the rock still visible after a millennia and a half. Long sweeping miles of quiet Argyll road, tree-lined lochs on one side and steep hillsides on the other, lead from here to Inveraray, home of the chief of the clan Campbell. The rivalry between the Campbells and MacDonalds became the most famous of the Highland's numerous blood feuds, but unlike some clans the Campbells were playing for more than just honour: for generation after generation they successfully enlarged their power and territory. By the 18th century the stanchly Protestant Campbell chief dominated the area, and as the Dukes of Argyll ran Scotland on behalf of the British government for much of the early- to mid- 18th century.

The Campbell's war cry was 'Loch Awe' - their ancestral seat of power before moving to Inveraray. Now Kilchurn Castle on Loch Awe is a picturesque ruin, the waters popular with anglers and the hills with walkers. Loch Awe drains out to Loch Etive, a sea loch with an entrance so narrow that the ebb tide has the appearance of river rapids. The sea opens up to Loch Linnhe and the Firth of Lorn, surrounded on all sides by mountains and islands - and in the middle of it all, the port and railhead of     Oban.

Oban
Oban is a springboard for other places, rather than a destination in itself. This is a shame as it enjoys a fine situation in a sheltered bay, has a beach and a couple of castles - Dunollie and Dunstaffnage, where the Stone of Destiny allegedly first touched Scottish soil - and makes the perfect base for daytrips into the Argyll hinterland. Sheltered by the island of Kerrera, Oban Bay is a superlative yachting anchorage, and the waters of the Firth of Lorn are amongst the finest - if most challenging - in Europe.

Although you can sail to many islands from Oban, most people are heading for Mull. The third largest of Scotland's islands, Mull is high, green, wet, and largely empty, made of dark volcanic rocks that form impressive landscapes, with waterfalls tumbling over the edge of seacliffs and columnar basalt formations, seen most famously - but not exclusively - at Fingal's Cave on Staffa. Many people visit Mull for the wildlife, with puffin, seals, porpoises, whales, otter, sea eagles and other unusual species to spot.

Mull is a great walker's island - from the magnetic summit rocks of Ben More, a sea eagle lazily flapping off the cairn as you approach at dawn, to the coastal (or hair-raising clifftop) path to the Carsaig Arches, views of Colonsay and Jura and a black volcanic beach. Yet two small islands offshore overshadow Mull for fame. Staffa is the first. Take the Giants Causeway (and the columns here are a continuation of the same geology that crop up across the sea in Ireland), riddle it with sea caves and the cries of puffins and other seabirds, put it on a small, uninhabited island: and you have Staffa. No wonder Felix Mendelssohn was inspired to write the Hebrides Overture after his visit to the great natural cathedral of Fingal's Cave.

The other island is     St Columba's Iona. Perhaps originally a Pictish holy site (Iona is named after the yew, the druid's sacred tree), Iona became a beacon of Christianity during the Dark Ages and retains its air of sanctity today. "That man is little to be envied," said Samuel Johnston, "whose patriotism would not gain force upon the plain of Marathon, or whose piety would not grow warmer among the ruins of Iona." One of Iona's secrets is the brightness of its light, thanks to its pale ancient rocks, white sandy beaches and shallow turquoise seas, a place that seems blessed when contrasted with Mull's cloud-shrouded, dark volcanic rocks. It is the holiest spot in Scotland: an old legend states that it won't be drowned at the apocalypse, and supposedly 48 (of which at least 25 are named) kings of Scotland, Ireland, Norway and Northumbria are buried in the abbey graveyard, as well as 6 Lords of the Isles and many chieftains, including the former leader of the Labour Party, John Smith.

St Columba
St Andrew may be Scotland's patron saint, but St Columba is Scotland's most influential indigenous one. An Irish nobleman, Columba came to Iona in 563 at the invitation of Comgall of Dalriada, part of a great wave of Irish evangelism that re-Christianised Britain and Northern Europe after pagan Germanic invasions. He turned Iona into an internationally renowned centre of Christian piety and learning, and is recorded as having repelled a monster in Loch Ness on his way to evangelise the King of Picts. His successors helped evangelise the Northumbrians, building an abbey at Lindisfarne, where the independent, cell-like structure of the early Ionan church came into conflict with hierarchical Roman evangelists. Rome won control of all Christendom, but in his church's opposition to metropolitan control, even Scottish Calvinists saw something to claim from Columba.

Today Iona sits on the edge of things, a fitting place for an end - or a beginning. It would be the ideal starting point for an amazing trek to Lindisfarne on the east coast. 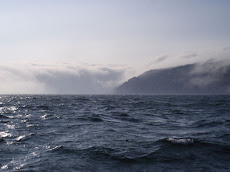 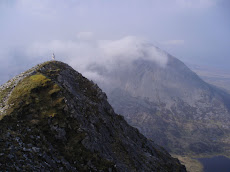 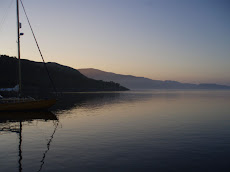 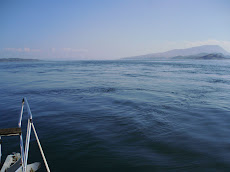 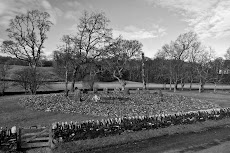 Inveraray Castle - HQ of the Campbells

Castle Stalker on its tiny island in the Firth of Lorne

Ben More - highest point on the island of Mull 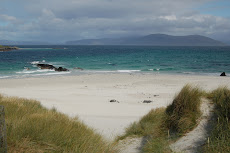