'There will be nae bevvying'

1971. The yard owned by Upper Clyde Shipbuilders was about to close. But the workers, led by union representatives Jimmy Airlie and Jimmy Reid had other ideas. The main weapon of unions had always been the strike. But the Jimmies had a novel idea - a work-in. The workers refused to leave, taking over the running of the yard from management. Through disciplined union leadership, the management of UCS had a change of heart, and the yard was saved. For a while. But the great story of industrial Clydeside was nearly over - a story that had begun over two hundred years earlier.

On a fine May day in 1765, James Watt, technician to Glasgow University, was out for a Sunday walk along Glasgow Green. He had been pondering steam engines, and how to make them efficient enough to really be practical. Suddenly, the idea came to him ('I had not walked further than the golf-house,' he later wrote, 'when the whole thing was arranged in my mind'). He made prototypes, and after some initial difficulties, met English tycoon Matthew Boulton who financed Watt's engine in 1775.

The Industrial Revolution had become steam-powered, and there was no looking back for Glasgow.

Glasgow. The biggest city in Scotland. The only real city in Scotland. A globally important factory of indie musicians. A football-mad cesspit of swaggering sectarianism. Take your pick. Glasgow is your best bet for glamour, grime, art, sport or crime - the source of the majority of Scotland’s social problems and almost all her best bands. Aspiring musicians may consider moving here, as the area around Glasgow is one of the most of     creative in Britain. A little bit of New York to Edinburgh’s Washington DC.

Glasgow music scene
While Edinburgh is the city to write a novel, Glasgow is the place to shoot a film or form a band. Sometimes it seems that everyone you meet is - or has been - a musician, and the city has a critical mass of venues and music fans that other cities lack. And why not, when you get to support the early efforts of people like: Gerry Rafferty, The Pastels, The Average White Band, Wet Wet Wet, Glasvegas, The Fratellis, Frightened Rabbit, Camera Obscura, Belle and Sebastian, Simple Minds, Franz Ferdinand, Donovan, Bis, Eddie Reader, the Communards, half of AC/DC, David Byrne, Deacon Blue, Mogwai, Texas, Chvrches, Teenage Fanclub, Sons and Daughters, Primal Scream, Ultravox, or the Sensational Alex Harvey Band?

Glasgow started as a cathedral town, and for over 1000 years was a pleasant village with one main street at a ford on the River Clyde. It grew after the 1707 union of parliaments gave it access to England's colonies in America and the Caribbean. Its position and the reluctance of Glasgow merchants to pay customs tax gave it an advantage over the west coast ports in England (Ireland, closer still to America, was barred from the Atlantic trade), and Glasgow grew rich on the backs of African slaves in cotton and tobacco plantations. The American War of Independence put the brakes on that, but the second and far more spectacular, steam-fuelled spurt of growth was not far away.

For Glasgow was on a navigable river, and the surrounding areas were rich in coal and iron. These natural advantages, combined with Watt’s invention and the tobacco merchants' capital and export market contacts, made Glasgow an ur-city of the industrial revolution. Like Chinese cities today, 19th century Glasgow mushroomed as the workshop of the world. While Manchester specialised in textiles, and Birmingham in a variety of small manufactures, Glasgow specialised in heavy industry, dominating global output in key sectors. At one time towards the end of the 19th century, one half of all the iron ships afloat in the world were built on the Clyde, and more than half the world's locomotives.

The workforce for this boom flooded in from cleared Highland glens, rationalised Lowland farms, Protestant Ulster and famine-starved Catholic Ireland. The city's amenities failed to keep pace with uncontrolled population growth, and cholera raged through unsanitary, crowded tenements. With the conditions experienced by workers it is no surprise that Glasgow was a cradle of the British Labour Party, or that     Irish Catholics were in the forefront of efforts to improve the collective lot. Great politicians such as James Maxton, Manny Shinwell, John Maclean, and     Keir Hardie took workers' rights to the unwilling heart of the British Establishment in Westminster, while Mary Barbour opposed evictions and organised rent strikes against rapacious landlords. Glasgow - and Britain - finally gained a majority Labour government in 1945. But by then Glasgow's industrial lead had gone. America and Germany, Japan, Korea and China were the new leaders. The works and mines were nationalised, the slums were cleared and the workers gained decent conditions at last - but the heavy industries had not modernised and work was about to disappear abroad. So what has happened since the UCS work-in?

Irish Catholics
while Irish Protestants - many of whose families had maintained links with Scotland since the plantation of Ulster - integrated invisibly into Scottish society, Irish Catholics were discriminated against from the first, barred from the skilled jobs in shipyards by Protestant workers and foremen. It did not help that they were usually poorer and less well educated than other immigrants, or that the prejudice Irish Protestants held against them transplanted easily to Scottish soil. At the height of immigration only 7% of Scotland's population was Irish-born (including the Protestants), mainly concentrated in industrial towns such as Coatbridge. Yet this, combined with a flood of Scottish emigration to the Empire and USA, was enough to cause existential panic in the Church of Scotland which fretted about Scotland being 'gradually emptied of its population, spirit, intellect and innate character'. Catholic immigrants made easy scapegoats. Only the rise of fascism in the 1930s brought the kirk to its senses and an end to overt discrimination. In the meantime, Irish Catholics formed tight-knit communities, feeling that prejudice against them meant they were not 'allowed' to integrate into Scottish society. There are echoes of that wariness even today, with old dividing lines ritualised in the support of Rangers and Celtic football teams. But the industrial revolution would not have happened, and Glasgow would not have been a great city, without the sweat of Irish labour and the Irish contribution to politics and culture.

Keir Hardie
the most compelling character in the history of the Labour movement was Keir Hardie. From a dirt poor family, he worked down a mine as a child and had been humiliated by unfair treatment from a hypocritical Christian boss when arriving late for work due to tending to his sick mother. He vowed never to be like that himself. A pacifist, teetotaller and animal lover, he fought for female emancipation and home rule, against sectarianism, and stood up for individuals against the kirk establishment. He came to national prominence in his campaigns and literature promoting miner's rights. Seeing that the Liberal party failed to protect miners, he formed the Scottish Labour Party in 1888 and was elected to Parliament in 1892, though his pacifist principles hampered his progress in the early socialist movement as he opposed Marxist revolution. Attacked in the street by patriots and sent to jail for opposing the Great War, he died in 1915 heartbroken at the senseless slaughter of thousands of young men in the trenches. Although failing to gain political power, his integrity, compassion and uncompromising example have inspired politicians ever since - though few could claim to have lived up to it.

The 1970s and 1980s were grim times on Clydeside, unreformed industries gone or going, an organised working class left without jobs, a lost city whose ideologically inspired planners had dumped the population into ranks of windswept tower blocks, Billy Connolly's 'deserts wi windaes'. This was the decaying city that inspired Alasdair Gray's gothic novel Lanark as well as Connolly's comedy. But in the 1980s Glasgow reinvented itself using a template followed by other post-industrial cities. The grime was sand-blasted off soot-blackened buildings to reveal fine Victorian architecture, the arts were invested in, and Glaswegians became proud again of their home city. With industrial growth ending in the 1920s Glasgow remains a perfectly preserved late-Victorian and early 20th century city, its gridiron streets of Art Nouveau the perfect movie stand-in for prohibition era Chicago or New York, the roomy stone tenements in its leafy West End taking city living to its perfect pitch. Entertainment and conference venues were built on old shipyard sites. And salmon returned to the Clyde. Perhaps with the new parliament in Edinburgh, Glasgow's population will continue to shrink, the axis of Scotland will return to the east coast where it was before the industrial revolution, and Glasgow will once again be a small and pleasant city: dynamic in a green rather than red way.

Cora Linn on the Falls of Clyde 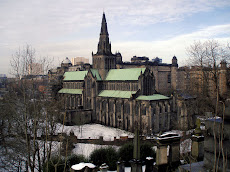 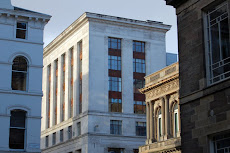 The towers of Park Circus in the west end of Glasgow

The whalebacks of Glasgow Science Centre

Sunset over the Clyde