'Damn you for a cowardly Italian!'

The Nessie Hunter scanned the loch with the eyes of an old sailor. Some had said they had seen something incredible, and this had been enough to bring him to Loch Ness years ago for a summer holiday. Now he was hooked and it had become a way of life. Would he see the monster in     Loch Ness? Increasingly, that was not really the question. Just yesterday he had watched some dippers work a stream and talked to a group of tourists who had sought him out. He was content.

Loch Ness
Loch Ness is interesting even without the monster. 24 miles long and 950ft deep, it is neither the longest, deepest or biggest loch in Scotland, but it holds more volume of water than any other. It is home to rare species of fish such as arctic char, who live at depth and are probably unaware that the ice age is over. Urquhart castle sits on a knoll with a view over the entire length of the loch, once one of the most strategic forts in the Highlands. In the days before roads, Loch Ness and its neighbouring waterways were an important route of communication between east and west coasts. They sit on one of the country's major faultlines, and today the Caledonian Canal which links these lochs provides a wonderful inland boating or canoe trip.

Loch Ness drains to the sea at Inverness in arguably the best location in Scotland. Its east coast aspect means it is (relatively) dry and sunny, yet only a short distance from the west coast and the best wild country in Britain. The Central Belt is only two hours away on a fast road. No wonder Inverness, capital of the Highlands, is the fastest growing town in Scotland! The lochs and glens to the west of Loch Ness are some of the most attractive in Scotland, retaining ancient pine forests long gone from many other glens in the Highlands. Walking through these glens - then around the spacious, roadless country at their heads - provides one of the best wilderness experiences Scotland has to offer. In Loch Ussie is said to be a magic stone, cast there by the most famous prophet in Scotland, the     Brahan Seer.

The Brahan Seer
The Brahan Seer was said to have come into possession of a stone with a hole in the middle, and when he looked through the hole, he could see the future. He is said to have predicted many events which came true long after his death and was himself killed by a local landowner, who asked him what her husband was up to during his trip to Paris. The Seer could not lie, and told the lady that her husband was being unfaithful to her with another woman - so the outraged lady had him boiled alive in a vat near Loch Ussie. The Seer threw his stone into the loch and cursed the lady's family, a curse which came true over the course of time. A few of his predictions remain to be fulfilled - including one about ravens drinking human blood, and an ominous one about black rain falling and making the land uninhabitable.

The rivers of these glens exit to the sea near Inverness, where a resident dolphin population can be seen playing. Boats can be hired to get closer to these amazing mammals, or you could try your luck spotting them from land at Chanonry Point or Fort George. Sticking out into the sea on a peninsula, Fort George is Scotland's premier example of an artillery fort. It was built in the 18th century as the last and most impressive link in a chain of forts at strategic points to help quell the Jacobite threat. By the time it was complete, Jacobitism was spent, but the emergence of Napoleon in France meant that Fort George potentially still had a role to play. The commander was reportedly keen for Napoleon to invade the north of Scotland, just so that he could try out his fort! Fort George is Scotland's last and most militarily advanced castle, but it never saw any action. Had it been completed in 1746 it might have, as close by is the most atmospheric battlefield in the British Isles -     Culloden Moor.

Culloden
The last pitched battle fought on British soil, Culloden was the Jacobites' last stand. They had retreated from Derby without a clear plan in December 1745, dispersed their forces, laid siege to various castles in Scotland, lost their friendly ports, and allowed the British Army under the Duke of Cumberland to gather ground and strength at his leisure. The night before Culloden, a daring Jacobite night attack failed through poor communication, and it was a tired and reduced force that faced the Hanoverians next day. Cumberland had papers forged and distributed amongst his men purporting to be intercepted Jacobite orders to give no quarter. For this he earned the nickname Butcher Cumberland, as his victorious soldiers roved over the surrounding countryside in the battle's aftermath, killing indiscriminately. Even on a sunny day Culloden has an eerie air, and there is a discrete and excellent visitor centre. Cawdor, the castle of Shakespeare's Macbeth is nearby; perhaps Shakespeare had a moor like Culloden in mind when he wrote the scene of the witches on the heath.

Around and north of Inverness is fertile farmland. The land around Arabella is Dutch in its flatness, more lowland than the Lowlands. Red Kites wheel over arable fields with distant views of snow-capped hills. The remains of fabrication yards line the banks of Nigg Bay, one of the largest anchorages in the world. Decomissioned oil rigs shelter in the bay awaiting their fate. At its seaward end the bay narrows at the quaint old county town of Cromarty, huddling in on itself against the wind. Cromarty was home of geologist Hugh Millar, who has a museum dedicated to his achievements, and the remarkable     Thomas Urquhart, who doesn't.

Thomas Urquhart
Sir Thomas Urquhart of Cromarty, Knight, was one of Scotland's foremost eccentrics. An extravagant and occasionally impenetrable linguist, he gained fame for his translations of Rabelais, although today is known for Pantochronachanon, Logopandecteision, and The Admirable Crichton. Unsuccessful in his plans to found a University of Cromarty, he fought at the Battle of Worcester on the side of Charles II. On being taken prisoner by Cromwell, he offered his plans for a Universal Language in exchange for freedom. ('My Universal Language is a most exquisite jewel. It hath eleven genders, seven moods, four voices, ten cases, besides the nominative, and twelve parts of speech; every word signifieth as well backwards as forwards; and it is so compact of style that a single syllable will express the year, month, day, hour and partition of the hour.') He died in exile from excessive laughter on hearing of the restoration to the throne of Charles II on Cromwell's death.

Cromarty aside, a scattering of attractive small towns dot the countryside of the Black Isle and Tarbat peninsula. Fortrose, Dingwall, Strathpeffer, Beauly, Tain, Sandwick, Portmahomack - and the industrial towns of Alness and Invergordon - prove that even far into the Highlands there are fertile, gently prosperous areas.

The coast is particularly dense with Pictish stones, some of which are gathered at the Groam House Museum in Rosemarkie (once seat of the Bishops of Ross), some in Tarbat Discovery Centre in Portmahomack (situated on the site of an old Pictish monastery), and others in their original situations outdoors, such as the Cadboll and Shandwick stones.

Inland is quieter, great empty fishing and stalking country, though it used to hum with activity: people were cleared from the long straths of Ross in successive waves. In 1792, am Bliadhna Caorach (the Year of the Sheep), crofters were forcibly ejected from Strath Oykel by the Sheriff of Ross, backed up by soldiers from Fort George. In 1845 Glencalvie was cleared without notice by the cruel factor Gillanders, despite the tenants never being in rent arrears. Those with nowhere to go spent a week camping in the kirkyard, their poignant messages still scratched into the windows today. The final great wave of clearances came in the aftermath of 1846-56s     potato famine. In 1880, cheap mutton and wool from Australia undercut the Highland sheep industry, and newly uneconomic estates were given over to hunting and shooting. The last wolf in Scotland was shot in Sutherland in the 18th century, and one landowner plans to reintroduce them to Glen Alladale. The empty glens face a choice - rewilding, or repopulating?

The Potato Famine
Despite systematic programmes of population clearance across the Highlands since 1762, and decades of voluntary emigration beforehand, the population kept increasing thanks largely to a new miracle crop, the potato. The potato could support more people per acre than any other crop, and poor tenants came to depend almost exclusively upon it. But in 1846, and again in 1847, the harvest failed due to potato blight. In Ireland this caused an unprecedented tragedy as a million peasants were left to die in their cabins and two million more penniless, starving and disadvantaged people emigrated, whilst Parliament in London and the wealthy philanthropists of Britain wrung their hands and decided to do nothing about it - even as the more fertile areas of Ireland exported its grain to England. The suffering in the Highlands was orders of magnitude less, as in Scotland, people did intervene. At first a charitable relief effort organised in Edinburgh and Glasgow, eventually the relief of Congested Districts became a government affair. Afraid of encouraging an indolent population, the destitute were only permitted survival rations in exchange for hard labour on infrastructure projects. Eventually it was decided by the likes of Sir Charles Trevelyan - who viewed the Gael as an inferior race - that the only permanent remedy was the complete clearance of the population. Passages were paid for emigration to the New World and Antipodes, and Highlanders flooded into the cities of the Lowlands and England.

Crops growing on the Black Isle

In the Black Isle

Nigg Bay from the Sutors of Cromarty 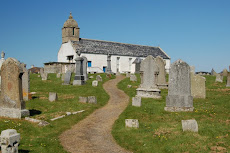