Who possesses this landscape? -
The man who bought it or
I who am possessed by it?

Norman MacCaig A Man in Assynt

From Trotternish on Skye you can look east to the mainland, in my opinion the most spectacular and beautiful part of Britain. The closeknit ridges of Knoydart and Kintail are replaced by lochan studded moorland, interrupted by monolithic thrustings of hills, an immense outdoor exhibition of great geological beasts. The rocks, up to 2.7 billion years old, are amongst the oldest in the world. There are beautiful beaches on low peninsulas from which the hills inland can best be seen. The water is cold, the beaches are deserted. The whole area has always been rugged and barren, playing little part in Scottish history, with few historic or prehistoric remains. The scenery, fishing, deer stalking and walking are what make this area, and those with a good car, comfortable accomodation, and luck with the weather will find this one of the most memorable places they can ever visit.

As a keen walker myself, I cannot recommend the area around the Ben Damph hotel on Loch Torridon highly enough. The finest mountain in Scotland (in my opinion) is Liathach, a hill first amongst equals in an area where every hill is fine. Torridon is an ensemble cast of individualistic mountains rising from rough moorland, and at the heart of the area is a loch which some believe to be more beautiful than Loch Lomond, Loch Maree. North of Loch Maree is Scotland's ultimate trekking area, a roadless district popular with walkers, with the remotest     Munro (hill over 3,000ft) and a friendly landowner. (Walkers should note that Scots law includes a right to responsible access to wild land.)

The Munros
It should come as no surprise, given the popularity of walking as a pastime, and the addiction to collections and lists in Britain, that there are a number of lists of hills to climb. By far the most popular are the Munros, named after the compiler of the first list: 282 distinctive hills over 3,000ft, many with subsidiary peaks. For many, it is a lifetime commitment to climb them all. For others, the Munros are not enough: the Corbetts are a list of all 221 hills between 2,500ft and 3,000ft with a drop all round of 500ft. The Munros are confined to the Highlands, Skye and Mull, but Corbetts cover more of the country, including the Southern Uplands and many more islands. For the real list-ticking geeks however, the ultimate list is the Marilyns: 1554 hills with a drop all round of 150m, whatever their height. These are in every corner of the country, and as the Marilyns is a Britain-wide list, they include 176 in England and 157 in Wales. My own book, The Weekend Fix, describes adventures amongst them - please buy it!

The only settlement of any consequence in the whole area is Ullapool, an attractive 18th century ‘new town' created to provide employment in fishing for people cleared from the glens. Palm trees grow amongst neat whitewashed houses, seals play in the bay, and on sunny summer days - especially during the annual Loopallu music festival when the town buzzes with activity - you might be lulled into thinking you are somewhere more exotic. That impression is only increased by a visit to Inverewe gardens, where trees and shrubs from around the world grow in the warm microclimate. At Scoraig, a roadless community practices self-sufficiency. This is home to Hugh Pigott, the country's leading expert in home-built windpower. And in Achiltibuie, next to the Summer Isles, experiments in hydroponics prove in this barren land that you don't need earth at all to grow crops. Given such ingenuity in the face of a hard environment, it is no surprise that Assynt was the first estate in Scotland to be bought out by its tenants.

Inchnadamph in Assynt is at the heart of a fascinating geological area. Its complex geology caused heated arguments amongst Victorian scientists, whose study of the area was a major contribution to the theory of plate tectonics. A great fault line runs north to south through the area, introducing rocks rare in Scotland like limestone. Rivers appear and vanish and polar bear bones from the last ice age have been found in caves near Inchnadamph. However the most immediately striking aspect to the whole area are the strange hills north of Ullapool: Stac Pollaidh, Canisp, Quinneag, Cul Mor, and especially Suilven.

Lurking deep in these hills is the highest waterfall in Britain, the 200m Eas a'Chuil Aulin. But for almost no effort, you can get instant exposure at the roadside Falls of Mesach, whose viewing platform juts over the edge of a dank, dizzying gorge. The area is sparsely inhabited and the entire Scottish Highlands were declared a 'no go zone' during the Second World War. It wouldn't have done for a spy to stumble across secret training for invasions or bouncing bombs, but the starkest example of a 'no go' area was the place dubbed     'Anthrax Island'.

Anthrax
During the Second World War, the government decided to experiment with various toxins and biological weapons (to drop on Germany if conventional warfare failed) and, as part of these experiments, infected an entire island with anthrax. This was Gruinard Island, only a short distance offshore. Inevitably christened 'Anthrax Island,' it was uninhabitable despite looking eerily normal from the mainland, but, fifty years after the end of the war, scientists returned and declared the island safe again for people to visit. Go on then, visit. You know you want to.

Once you head north of Ullapool a car is almost essential - but a walking trip to Cape Wrath, the most northwesterly and perhaps most impressive point on the British mainland coast, is well worth the effort. Its beaches are beautiful and hauntingly lonely, and walking there is by far the best way to experience Cape Wrath, though it is possible to catch a ferry and shuttle bus along a potholed, private road to the lighthouse. Old burnt out buses litter the side of the road and you can't help speculating how they reached their ruined state, with a naval and air force bombardment range nearby...

Liathach from a distance 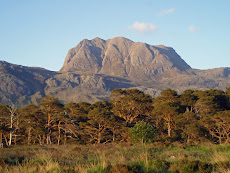 Individualistic hills in the north of Scotland

Stac Pollaidh and Beinn an Fhidleir

The north coast from Cape Wrath