East, the widening Forth snakes to the sea. West, the swamp of the Carse of Forth, passable only in a few, secret places, stretches as far as the first eruptions of the Highlands. Between sea and swamp lies Stirling Castle, dominating the only crossing of the Forth. (Whoever held Stirling, they said, split Scotland in two.) The last English garrison was holed up in the castle and had, by the rules of chivalry, promised to surrender and return home unmolested should succour not arrive by an agreed time. That time had nearly come. It was midsummer, 1314, and England's hapless king Edward II was just a few miles away with a vast army, marching up the southern shore of the Forth. And it was here, at the most strategic geographical pinch-point in Scotland, a Scottish army defeated a larger and better equipped English one. Scottish history would be stained by more set-piece battlefield defeats than wins. But Scots, through their dark times, have always had that one, shining victory to inspire them. Robert the Bruce.     Bannockburn. 1314. Across Britain, only the dates 1066, 1690, and 1940 have equivalent resonance.

Robert the Bruce
When king Alexander III died without an heir in 1286, chaos threatened in the form of a civil war between the Bruce and Balliol/Comyn factions. Scotland's representatives invited Edward I of England to adjudicate. After insisting everyone recognised him as overlord, he chose Balliol as king. However Balliol rebelled in 1296, and Edward, who had already conquered Wales, assumed direct control of Scotland. Bruce petitioned the English king to place him on the Scottish throne, whilst simultaneously maintaining secret relationships with the Scottish church which sought to maintain its independence from the Archbishop of York. This delicate balancing act disappeared when Bruce's secret plans were betrayed to Edward by his main rival in Scotland, John Comyn, whom Bruce stabbed - in a church - in 1306. Bruce was flushed into the open by this act. Bishop Wishart of Glasgow shrieved Bruce of the sin of breaking the sanctuary of a church, and Scotland's few remaining loyal nobles crowned Bruce king. One defeat followed another at the hands of the Comyns and their associates, and Bruce escaped to the islands with his life.

From that point on, Bruce fought back against his many enemies, English and Scots, from a tiny foothold in Galloway to control almost all of Scotland. His big break was the death of the fearsome Edward I and his replacement by his ineffectual son, Edward II. Edward II was no match for his father or, as history would prove at Bannockburn, for Robert the Bruce. However Bannockburn did not stop English and Scottish armies beating seven bells out of each other over the following three hundred years as they fought for control of the country. Even today, after several hundred years of peace, Scotland's relationship with England is one of the defining features of the national psyche.

Which is one reason why, although the tours of most countries start in the capital, this tour of Scotland starts at Stirling. Superficially similar to Edinburgh - a city straggling down a hill from a crag-girt fortress - Stirling is less cosmopolitan, but its castle and smaller old town retains more atmosphere. From the castle ramparts the Highlands can be seen, and old buildings line the streets - Argyll's Lodging, Mar's Wark, the Kirk of the Holy Rude. On the other side of Stirling brig, a steep wooded crag rises from the floodplain, topped by a large, ornate tower. This is the     Wallace Monument, built in the 1860s through a Victorian enthusiasm for publicly-funded national monuments.

Wallace Monument
Public subscription was a popular way of raising money to build monuments and infrastructure in the 19th century. Some monuments failed to raise enough money, such as the 1822 plan to raise a monument on Calton hill to the victors of Waterloo. A monument to William Wallace was another story - as Robert Burns wrote of his childhood reading, 'the story of Wallace poured a Scottish prejudice into my veins that shall boil along till the floodgates of life shut in eternal rest'. Wallace was Scotland's national hero. He ultimately failed in his fight to free Scotland from English control, but unlike Robert the Bruce, he never wavered in his opposition to Edward I.

Stirling, thanks to its central location, is handily placed for much of Scotland. Glasgow, the Trossachs and Perth are half an hour's drive, Edinburgh and Dundee an hour. And even though the Carse of Forth is nowadays drained for farmland and the Forth is bridged in other places, the area downriver of Stirling remains strategic. You won't find the massive Grangemouth oil refinery on any calendars of Scottish scenery, but it is considered important enough (along with Sullom Voe, Peterhead and Scapa) to be one of the few UK placenames on the CIA World factbook's map.

Linlithgow Palace, on the other hand, is fit to grace any calendar. Stripped back to bare stone thanks to neglect and an 18th century fire, in its renaissance heyday it rivalled the chateaux of the Loire. As an ancient royal burgh, Linlithgow remains the rose in the tattie plot of a heavy industrial area. Shale bings from the 19th century oil industry dot the landscape between Stirling and Edinburgh. It was here that shale oil was mined and James Young invented the distillation of paraffin from coal. West Lothian's heyday as a centre of mining and manufacture has now passed, but it thrives as a convenient commuter location between Edinburgh and Glasgow.

This narrow strip of land between Scotland's two biggest cities hosts much older remains than giant shale bings. Rome's vestigial northernmost frontier - built in the Antonine era between AD 142 and 154 - can be traced in the low hills above Kilsyth, Falkirk and Grangemouth. Although little can be seen (except at Rough Castle and Bearsden bathhouse), it has been inscribed in the UNESCO World Heritage list under Frontiers of the Roman Empire. However, given that the Antonine Wall was abandoned in AD 162 for the greater security of Hadrian's Wall in Northumberland, it marks less a permanent frontier, more the limits of an extended raid that petered out at the muddy shores of the Forth.

At a final narrowing of the Forth just before Edinburgh and the sea, a red Victorian giant rises from the dawn haar. The Forth Bridge is a massive physical reminder of 19th century industrial might. Its huge tubular frame strides across the Forth in three great skeletal spans, contrasting with the single, sinuous curve of the 1960s road bridge. The road bridge has already reached capacity and is being replaced with a third crossing. The rail bridge in comparison looks timeless, likely to stand for as long as its paintwork is maintained. While Rome left little mark on Scotland, the same can't be said for the Victorians.

The Forth Bridge is a fitting entrance to Edinburgh, a city of half a million inhabitants, Scotland's capital and one of the most beautiful and striking in Europe.

Stirling Castle - the brooch of Scotland 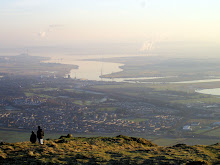 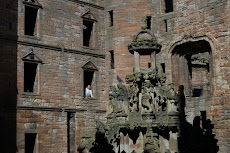 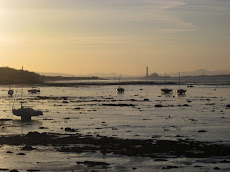 The Famous Forth Bridge 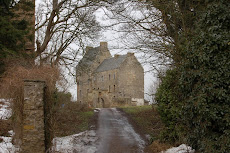