'The glorious marriage day of the Kingdom with God'

Archibald Johnston on the National Covenant

Beyond Ayrshire and the River Nith is an area of great yet subtle beauty, of pastoral grazing and rough shorelines, low seacliffs and treeclad slopes, and quiet, self-sufficient rural villages, cut off from the rest of Scotland by the Galloway Hills. Galloway and the Solway coast are integral to Scotland, yet Scotland seems a place entirely unnecessary to the Solway. And why not, when it was once ruled by its own kings, the     Lords of Galloway?

Lords of Galloway
Galloway was one of the early Scottish kingdom's intractable areas. 11th and 12th century kings imported Norman knights who thickly covered Nithsdale and Upper Clydesdale - the 'Galloway Marches' - in mottes, whilst Norse-Galweigan Fergus, relative of the King of Man, ruled as King of Galloway in his own right. The Galweigans were not seen as fully Scottish, and when David I lost the Battle of the Standard in Yorkshire in 1138, it was easy for chroniclers to blame the 'wild Galweigans' whose indiscipline in the vanguard was fingered as the cause of the defeat. But Fergus was no savage, founding major abbeys and monasteries and inspiring medieval literature - the Roman de Fergus - and the Lords of Galloway aided the Scots king against their Moray-based rivals for the throne. Fergus' grandson Alan was the last of the semi-independent Lords of Galloway, and on his death in 1234 Alexander II finally gained control over this area, planting the Comyn family who helped fight a rising by Alan's sons.

The tales of the Solway are different. They are tales of smugglers and sailors, heroic sea rescues and self-sufficiency - but not stern self-sufficiency. This is the sunny land of the Scottish Riviera, the evergreen land of The Wicker Man, a place whose folk tales lie outside the mainstream. They are also tales of the religious persecution of     Covenanters, whose insistence on worshipping their own rites in spite of the king's laws today seems, for all their fanaticism, applaudably thrawn.

Covenanters
Religion was a serious business in 17th century Scotland, with unresolved tensions between the Episcopalian king, and the Presbyterians, who opposed gaiety and elected their own ministers. The National Covenant - a document railing against false faiths organised by Archibald Johnston of Warriston - was signed in 1638 by all walks of life. The government of Charles I, who had been attempting to force Episcopalian practices on the Church of Scotland, was ousted by Presbyterian coup. The Covenanter army then beat Charles' forces and occupied Newcastle. The crisis led to the English Civil War, the execution of Charles by Cromwell in 1649, and - when the Scots took violent umbrage at the murder of their king - direct rule of Scotland by Cromwell until the restoration of the monarchy in 1660.

The Covenanters came to grief after Charles II's Restoration. In Scotland, Presbyterians were ordered to convert to Episcopalianism or be persecuted. Most did, but some resisted, especially in Galloway and the south-west, suffering for their faith. Here the Restoration went by an alternative name - the 'killing time'. Refusing to attend Episcopalian services, folk gathered in the countryside for open-air conventicles, posting sentries to warn of government dragoons. Presbyterian fugitive-ministers hid in caves and one, Alexander Peden, wore a crude leather mask to avoid recognition. (Presbyterians were not to regain the upper hand until the arrival of William of Orange in 1688.)

The lush grazings of Galloway are bordered to the north by surprising rugged hills, more reminiscent of Rannoch Moor in the Highlands than the smooth sheepwalks of the Border hills to the east. They gave Robert the Bruce a place to hide and conduct guerrilla warfare at the start of his campaign for the Scottish throne. It was to these hills Richard Hannay also fled in John Buchan's classic The Thirty-Nine Steps, and they give the finest hillwalking in southern Scotland, their ridges quieter than they deserve as people bypass them for the Highlands and the Lake District. This quietness is a bonus to the connoisseur, and the area was designated Britain's first Dark Skies Park, an ideal site for stargazing.

Down the hills to the Solway coast, Sweetheart Abbey sits above Carsethorn – birthplace of the father of the US Navy, John Paul Jones. The sea reveals miles of muddy expanse at low tide, great feeding grounds for wading birds but treacherous to humans. The Solway tide is not to be messed with. It has killed before, most infamously in the case of the     Wigtown Martyrs. Despite this, tidal Rough Island is an irresistible lure, a perfect simulacrum of Enid Blyton's Kirrin Island, somewhere for the childhood imagination to run free. The pretty resorts of this section of coast are nicknamed, without too much irony, the Scottish Riviera.

Wigtown Martyrs
On 11 May 1685, two Covenanters, Margaret McLachlan and Margaret Wilson, were judicially murdered for refusing to swear the Episcopalian oath. Their mode of execution was to be novel: tied to stakes in the Solway Firth and drowned as the tide came in. Margaret McLachlan, the elder woman, was staked further out, in the hope that the younger woman would be terrified by the sight and swear the Episcopalian oath. But she did not. Margaret Wilson was eighteen years old.

In times past the Solway coast was renowned for smuggling (tax avoidance approaching the status of a patriotic duty in the 18th century) helped by the many tidal caves. At Balcary Point, it is alleged that one of the old smuggler's caves leads directly to the wine cellar of the local hotel! Robert Burns took a much hated job in the customs here, penning The De'il's Awa' Wi the Exciseman as a result of his experiences. Hauntings abounded – ghostly tales put about by smugglers to keep prying eyes away after dark. And modern stories of eeriness are at home here too, the 1973 cult film The Wickerman shot in Kirkcudbright and near St Ninian's Cave. Legend has it that 4th century St Ninian founded Scotland's first church at Whithorn, which became an important pilgrimage site in the middle ages. However my own pilgrimage would be to Wigtown to sate my bibliophilia.

Wigtown
Following on from the success of Hay-on-Wye, Wigtown was designated Scotland's official book town. The book town concept is intended to provide an economic and cultural boost to a deprived if pleasant area, and in the attractive town square the football shirts of the locals mingle with the tweedy outfits of the bookshop owners. The town hoaches with bookshops: a book-browser's paradise. There’s a book festival and a distillery. Where else in Scotland would you pray it rains when you visit!

Galloway narrows to a point at Stranraer, ferry port for Belfast, but the land gives one last flourish in the hammerhead peninsula of the Rhinns. A microclimate allows subtropical plants to flourish in Logan Botanic Garden, and the sun often shines when the rest of Scotland glowers under cloud. Trim white houses and the ever-present sea give it the feel of an island. Scotland shears away in seacliffs at its southernmost point of the Mull of Galloway, tidal trails streaking the sea, the Isle of Man a few hours tantalising sail on a fine day. But it is to Kilantringan Bay at sunset I am drawn, white lines of surf in the bay, Ireland turning velvety black, as the lighthouses in Galloway, Antrim and Down wink at each other.

Drumlanrig: home of the Duke of Queensberry, largest landowner in Britain

Rockliffe and the Rough Firth

Balcary Point on the Solway coast 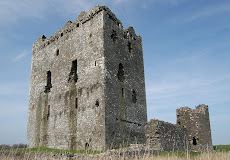 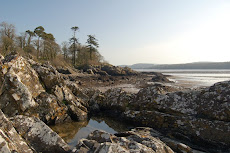 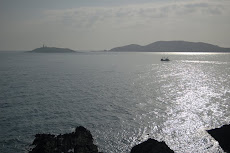 The Isle of Whithorn 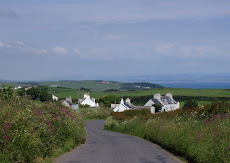 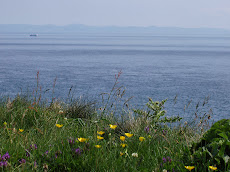 Isle of Man beyond Galloway cliffs

Playing Music on a South-Western Beach