Robert Burns To a Mouse

Rounding Ardlamont Point, Para Handy's 'Cape Horn of the Clyde', the steamer wallowed a little in a freshening swell as it headed for Tarbet, the last stop for the day. Several hundred day trippers were aboard, enjoying a jaunt doon the watter for the Glasgow Fair. An accordion band played in the smoky lounge bar, barely heard above raucous laughter from the drunken mass who had lodged themselves there since the Broomielaw. Women in cloche hats and twill coats promenaded with brylcreemed men on the decks, drinking in the brisk watery air and views of hill and sea, so different to Glasgow's soot and grime. The engines throbbed constantly underfoot, their giant pistons watched from an inspection gallery by fascinated boys. A short stop at Tarbet - this was a particularly long day trip - and the steamer pulled away again from the pier, the weans throwing chips at circling seagulls. They would remember this trip for years. Those who stopped off at one of the resorts for a week's holiday, guddling for trout in the burns, playing cowboys and indians in the woods and eating icecream along the promenade, were to understand that paradise was just a short boat ride from Glasgow.

Beyond the last shipyard the Clyde enters its attractive Firth, a hilly coast dotted with former resorts. You are still close to the city, but the Highlands are within touching distance to the north and west, sea lochs biting in on all sides. This is excellent sailing country, with peninsulas, islands, hills, beaches, and little ports in abundance, sheltered from the worst North Atlantic rollers by the protective arm of Kintyre. It is such good sailing country in fact - with deep sheltered water, private roadless lochsides, but still close to a large local labour pool - that the UK bases its nuclear submarine fleet on the Clyde at Faslane and Coulport. (As did the US Navy during the Cold War, in the nearby Holy Loch.) It is a rare luxury to live in a major conurbation (2 million people inhabit the area immediately around Glasgow) yet be close to such natural beauty, and in the days before cheap jet travel to the Mediterranean and Florida, these Clyde towns were holiday resorts for the people of Glasgow, arriving 'doon the watter' by train and paddle steamer - one of which, the Waverley, still plies her trade. Today, despite the city's proximity, this coast is a relative backwater, with few tourists. The days of ships anchored all over the Tail o' the Bank are gone. The towns wear the faded glamour of other British Victorian seaside resorts. Rothesay. Largs. Millport. Dunoon. Glasgow has reinvented itself, but the Firth slumbers on. Yet its attractions remain for those who seek them out, and the superlative yachting waters accommodate beautiful islands such as mountainous     Arran, compact Cumbrae, and historic Bute.

Arran
Southernmost of Scotland's major islands, Arran is one of the most varied and attractive, with soaring granite peaks and gardens of a lushness unknown in the Western Isles or Shetland. Arran boasts some of Scotland's finest hills, and is very accessible to the Central Belt. Yet despite this it feels remote, especially in winter when it is rarely visited. You can take the ferry from the Lowland town of Ardrossan for Arran, drive round the coast to the north, and be in a completely different world, a Highland world of peace and silent stones. Perhaps this is why Arran, or rather the inaccessible peak of Holy Island just offshore, was chosen by Buddhists to host a new monastery.

The first sight of Bute is an unconventional one - the splendidly ornate Victorian toilets on the pier at Rothesay. Rothesay is mixture of the faded and exotic, with winter gardens, an art deco pavilion, palm trees on the promenade, the hills of Argyll close at hand, a castle that would not look out of place as a Templar stronghold somewhere in the Eastern Mediterranean - and Mountstuart, the stupendously ornate mansion of the Marquises of Bute who made their fortune in Welsh coal mines. But venture forth and Bute gives a different, pleasantly pastoral impression, with a choice of attractive sandy bays. And at Bute's southern extremity the bucolic atmosphere changes. There is a feeling of age and sanctity surrounding the chapel of St Blane, a popular 6th century figure from the saint factories in Ireland. The rock strata bursts through the soil, bent back at the same angle as the windblown coastal trees, with open views across the rocks and water to the hills of Arran. You can imagine visitors to St Blane putting in at the little bay beneath the prehistoric fort Dunagoil. Or perhaps not just pilgrims, but a Viking longship.

For in 1098, this coast became a formalised frontier between the lands of the King of Norway (who held suzerainty over Kintyre and the islands) and the King of Scots. To hold their own frontiers, the Scots introduced Norman knights, which is how in 1136 the Breton FitzAlan family came to be granted the lands of Renfrew. They consolidated their position by defeating Somerled, Lord of the Isles, when he attacked Renfrew in 1164. The FitzAlans provocatively built Rothesay Castle on the island of Bute, and it was attacked and captured by the Norse in 1230. However the days of Norwegian power on the west coast were numbered, their last hurrah being the     Battle of Largs.

Battle of Largs
Seen at the time as a minor engagement, the Battle of Largs is now remembered as the final confrontation between Scots and Norse. In 1263 Haakon IV of Norway, in a longship trimmed with gold, brought a great fleet down the west coast. The Hebrides, which had fallen under the influence of Scottish kings, were brought back under his personal rule. He sailed into the Clyde and negotiations began over the ownership of the isles. Alexander III had nothing to match Haakon's longships: he was invincible at sea. However Haakon could not match Alexander's mounted knights: landing a force in Ayrshire, rather than the islands, could prove disastrous. The Scots knew this, and bade their time in interminable negotiations. Eventually a great storm blew up on the last day of September and Haakon's ships were forced onto the Ayrshire shore. They were attacked by the Scots, but took to the waves again without much loss. However with winter approaching, Haakon retired to a safe anchorage in Orkney where he fell ill. As his life ebbed away he dismissed his priest and called for his bard. Haakon died to the sound of his genealogy being recited and reminders of his ancestors' heroic deeds. In 1266, Haakon's son Magnus signed the Treaty of Perth, ceding Man and the Hebrides to Scotland in return for an annual payment.

This pastoral part of Lowland Scotland, facing across the Firth of Clyde to the Highlands, is a land of heroes. Wallace and Bruce came from here. Supermodel Kirsty Hume hails from Ayrshire. Football manager Billy Shankly too (aspiring football managers may fancy sampling the local water, as the area around Ayrshire and Glasgow raised not just Shankly but Matt Busby, Jock Stein, and Alex Ferguson). And the most famous of them all,     Robert Burns.

Robert Burns
Robert Burns, the Ploughman Poet, is Scotland's greatest and most popular poet, although others such as James Hogg, Walter Scott, Sorley Maclean, Liz Lochhead, Hugh MacDiarmid and Lord Byron are no mean rhymers either. He was a better poet than farmer, and through the need for money nearly emigrated to Jamaica as a plantation clerk before the sell-out success of his first volume of poetry persuaded him to stay. Because Burns wrote largely in vernacular Scots, critics sometimes dismiss his work; but a comparison with the conventional canon of great Romantic-era poets, Shelley, Wordsworth, Byron, or Keats, shows that these poets only occasionally match Burns' turn of phrase and hardly ever his vigour or social intelligence. And unlike many other poets, Burns also wrote songs, in which he excelled more even than in poetry. The author of 'Auld Lang Syne,' Burns is undoubtedly Scotland's greatest songwriter.

One of the unusual facets of Burns - and nothing to do with the man himself - is the cult of Burns' Night. Every year, on the 25th of January, Scots at home and abroad celebrate Burns' Night, with haggis, whisky, bagpipes, addresses to the lasses, and poetry. There cannot be many poets with their own annual day!

Inland, Ayrshire becomes bleaker and more rugged, with moorland and old mine workings in the east surrounding forgotten mining towns like Muirkirk and Dalmellington. To the south the primaeval, unfrequented Carrick Hills rise above huddled villages like Straiton. On the coast, the road becomes squeezed again between the sea and encroaching hills, and the countryside looks increasingly similar to the glens and coasts of nearby Northern Ireland. Offshore, the abrupt, improbable pebble of Ailsa Craig humps out the sea, halfway between Belfast and Glasgow. And dramatically sited on its low seacliff, the National Trust for Scotland's most visited attraction,     Culzean Castle.

Culzean
South of Ayr, Culzean (pronounced cul-ayne) Castle and country park is one of the country's most popular tourist attractions. It is not hard to see why. A magnificent Adam mansion set in mature grounds with a beach and caves to explore, the pretty port of Maidens and Royal Turnberry Golf course nearby, and the optical illusion of the Electric Brae to bamboozle drivers into thinking they are rolling uphill. One story from a tour of the castle sticks in my head. The guide informed us with relish that one of the 18th century lords of the castle, a notorious smuggler, decided to quit smuggling (no longer acceptable for a gentleman and a peer) and get into a more respectable trade. The trade he chose? The slave trade!

Firth of Clyde from Greenock

The last seagoing paddle steamer in the world - the Waverley

Arran and the Firth of Clyde 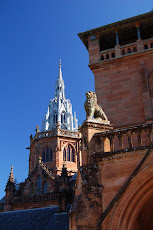 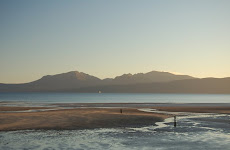 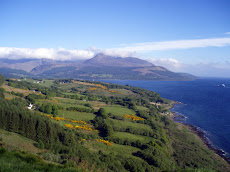 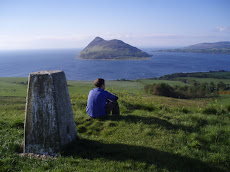 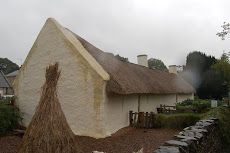 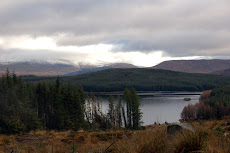 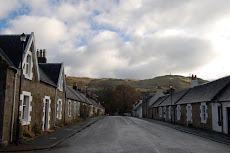 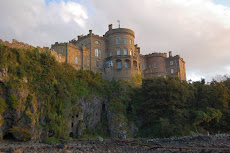