'My name is wee Jock Elliot,
An' wha daur meddle wi' me?'

Seeking the soul of Scotland? You don't need to range over the furthest Highlands or delve into the depths of the cities. It is here, in the Borderlands, that Scotland is distilled: nothing dramatic, grotesquely swollen or diminished; an attractive landscape of rolling, sheep-dotted hills, modest towns and villages, salmon rivers, tower-house castles, and a generally rural air. Much of Scotland's story can be told with reference to events in these glens. The architecture is typically Scots; the gross urbanisation of the Central Belt nearby yet distant in feel; the echoing wilderness of the Highlands glimpsed only in flashes. The Borders today are modest, beautiful, perhaps Scotland's best-kept secret. But they were not always so quiet, as the tales of the     Border Reivers attest.

Border Reivers
a reiver was a pastoral raider, attacking his neighbouring 'surnames' for practice, profit, and retribution. The classic raid involved a small group of men on horseback riding out in late autumn, after the harvest but before winter snows. They would ride at night, round up their victim's cattle, and herd them back to their own lands, leaving the bulk of the raiding party watching the rear in case of hot pursuit. Isolated farmsteads along the way might be burned or ravished and anyone with a bit of money built a tower house to protect themselves, a fortified private residence typified by Smailholm. Brutality, craftiness, horsemanship, hardiness, family loyalty and fighting ability were prized above all other traits in this society. In the times when relations broke down between the Scots and English crowns, both sides found reivers an asset in disrupting the Borderlands: but times of peace were more problematic, as the reivers' lawless habits and complicated webs of allegiance, enmity and revenge proved stubbornly durable. Scottish reivers were as happy to attack Scottish surnames as English - and if there was something in it for them, would assist an English surname against a Scottish one as soon as cross the border themselves.

And what made the violence stop? James VI took over the English throne in 1603, and the reivers no longer had anywhere to hide. The most recalcitrant were shipped off to Ulster or America, where they became the Scots-Irish, better known today as rednecks.

For these rural dales bore the brunt of raid and invasion between Scotland and England for near three hundred unstable years between 1300 and 1600. They became a semi-permanent warzone outside the control of central authority, a British Afghanistan, where the March Wardens and leading warrior families on either side of the border ruled. Those years defined the identity of this now-peaceful region as much as the clansmen did the Highlands, and the many ballads of the warrior families inspired Sir Walter Scott to bring them to the world's attention in his Minstrelsy of the Scottish Border. Elliot of Lariston. Chevy Chase. Tam the Rhymer. Helen of Kirkconnel. And     Kinmont Willie.

Kinmont Willie
There's many historical events and border ballads from the reiver days, from Jonnie Armstrong promising to kidnap Henry VIII if James V let him go free, to the maiden Lilliard, fighting the English at the Battle of Ancrum Moor, to the tale of Jock Elliot, who near-fatally wounded the most influential man in Scotland, James Hepburn, and swaggered around boasting of it afterwards. My favourite is that of Kinmount Willie, apprehended at a truce day in 1596 by Lord Scrope, warden of the English west march. Scrope had complained to his counterpart in Scotland of Willie's depredations, and had grown sick of being ignored. However Lord Buccleuch took umbrage at Scrope crossing the border to apprehend Willie in contravention of the agreed process, and determined to get him back. Willie was placed in Carlisle Castle, a fortress that no Scottish siege had ever taken. When diplomatic means failed, Buccleuch plotted to spring Willie by stealth, calling in favours from friends and allies, including an agreement with reivers on the English side that his commando would pass unmolested. The well-planned raid sprung Willie without loss of life, embarrassing Scrope and enhancing Buccleuch's reputation. Elizabeth of England demanded an explanation, asking "How dare you undertake such a presumptuous venture?" "What dare a man not do?" came the gallus reply.

Before those wars, this was a prosperous area. The medieval wool trade brought in a lot of money, and the trade in hides ran down the rivers Jed, Teviot, Gala, Ettrick, Yarrow and Tweed to the entrepot of Berwick, where French, English and Flemish merchants eagerly awaited a sale. Four great abbeys were built, at Dryburgh, Kelso, Jedburgh and Melrose, though all sit in ruins thanks to the violence of the reiving days. The attractive market town of Melrose has an even older history: the triple-peaked hill of Eildon hosts one of the largest prehistoric hillforts in Britain, with ramparts encircling the foundations of at least 300 houses. Antiquarians suggest that three thousand years ago, this magnetic landmark was a religious and ceremonial gathering place for a wide area. Today Melrose forms the epicentre of one of Scotland's three great sporting divides: shinty belongs to the Highlands, and football dominates the Lowlands. But rugby, the farmers' game, rules in the Borders.

As the rivers rise, the Tweed splits into its tributaries, the Teviot, Ettrick and Yarrow. These rivers wind up into high moorland, crossing watersheds on some of the most forgotten roads in Scotland. The Tweedsmuir hills provide grand walking for the hiker keen to escape the crowds in the more popular Highland or Lake District hills. To the south, the wide-open spaces of the     Cheviot Hills form a natural barrier between Scotland and England. This was the most unruly area of all in the reiver days - Liddesdale, where Armstrongs defied kings. Here is Hermitage, the grimmest keep anywhere in the Borders, whose castellan Lord Soulis delighted in torture and was eventually boiled alive himself by exasperated locals. Hermitage Castle is sinking into the ground - under the weight, according to an old local legend, not of simple subsidence but of shame through the iniquity that occurred within its walls. Modern times have witnessed grosser iniquities; in 1988 a jumbo jet crashed on Lockerbie, killing hundreds.

The Cheviots
Despite the similar landforms on either side, the Cheviot Hills mark a profound geological boundary. A very (very) long time ago, the rocks that were to become Scotland and the north of Ireland were part of the North American continent, which ground up against the Eurasian continent. As the Atlantic opened up Scotland and Ulster were left behind on the European side, a geological minding of America and Europe's embrace.

But let's leave the Border on an uplifting note. As soon as the road crosses the border it passes the most romantic village in Scotland - Gretna Green. This is the first village in Scotland, the target of lovestruck teens eloping across the border to marry without parental consent, Scots law being laxer than English in the 18th and 19th centuries. The legal differences have gone - but Gretna does a booming wedding trade to couples attracted by its tradition.

The plain tower of Smailholm 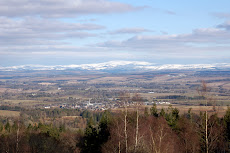 The Cheviot and Newton St Boswells 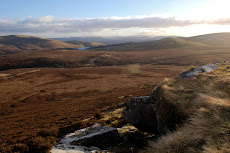 The Tail Burn tumbles steeply down a grassy Border hillside

The stark ruin of Hermitage Castle