Lord Kames, president of the Society of Improvers, looked over his East Lothian fields and was happy. His guests from Germany, England and Holland were impressed. The inefficient strips of runrig had been rationalised into larger fields, enclosed by neat walls and hedges. The mire had been drained and planted. He was using the English plough, foreign grass, turnips and clover, drilling machines, four-field crop rotation, and understood the chemistry of manure. The peasantry grew their own crop, potatoes, which had been introduced in 1739. The ancient, squalid fermtouns and hamlets had been demolished and replaced with handsome two-storey stone farmhouses. With more people than was needed to work the land, the surplus population could work as weavers or in the coal mines, living in new towns such as Ormiston, built in 1735. There was much for Lord Kames to be satisfied about. In the space of fifty years, Scotland had gone from one of Europe's agricultural backwaters to the most advanced farming nation in the world. Or at least     the Lowlands had, and especially Lord Kames' particular patch. Scotland's current farming landscape, and the core of most of her small towns, owe everything to the 18th century improvers.

The Lowland Clearances
Most people have heard of the industrial revolution, but the agricultural revolution was just as important. Fields were fenced off, drainage improved, swamps cleared, new crops, tools and practices used and substantial farmhouses built. Modern farming practices had caused riots and unrest when they arrived in Eastern England from the Low Countries, but it was a quiet affair in Scotland a few generations later despite a huge displacement of population from country to town. It helped that the Lowland peasantry was already remarkably peripatetic even before the industrial revolution, and alternative employment was readily at hand in the industrial towns appearing all over the Scottish Lowlands. By the time the Lowland clearances were over, the change to the landscape and built environment was total. Such was the improvers' zeal, it is almost impossible to find the sort of quaint, pre-industrial domestic rural architecture in the Lowlands that is common elsewhere in Europe.

The area between Edinburgh and Berwick has long been the most fertile in Scotland, the first to pioneer agricultural improvements introduced from England and the Low Countries, the first area with Royal Burghs, an area thick with aristocratic mansions and castles (including the home of Lord Balfour, whose famous Declaration helped lead to the foundation of the state of Israel). Even in prehistory this was a favoured area, with more hillforts than anywhere else in Britain. One of the biggest is Dunpender (Trapain Law) once home to the chief of the Votadini. They befriended the Romans, perhaps allying themselves with Rome to best their aggressive neighbours, the Selgovae. When the Romans retreated along Dere Street to Hadrian's Wall, the Votadini worked as a buffer tribe, exacting tribute in return for keeping Rome's northern frontier quiet.

Today East Lothian is a gentle and faintly prosperous arable county, dotted with quaint villages like Gifford, Stenton, Aberlady, or Dirleton, sandwiched between the sweeping sheep walks of the Lammermuirs and an attractive coast, all beaches, bays and links golf courses. At the far side of North Berwick sits the impressive ruin of Tantallon Castle, and a little further on again, the old port of Dunbar. Dunbar was the childhood home of John Muir, father of national parks in the USA - as well as being the site of two great     English victories: in 1296, when Edward I crushed a hastily cobbled-together force loyal to John I, and in 1650, when an army of Covenanters made the mistake of leaving their strong position to fall - or so they planned - on Cromwell's Roundheads.

Endemic Warfare
The ebb and flow of fortunes across the Border could make it difficult for the March lords to know which monarch to support, and on occasion Dunbar became the Calais of Scotland, an impregnable port loyal to the English crown and essential base for attacking the Lowlands. This Eastern March suffered the most from the various wars, raids, invasions and scorched earth policies of the 14th to 17th centuries, but though losing most of the big pitched battles (Flodden in 1513 being the most disastrous), the Scots excelled at guerrilla warfare, making Scotland impossible for the English king to conquer. The instability of this way of life taught people not to invest in immovable objects, despite the richness of the land, and Scotland's French allies openly disdained the poverty of the country people's cabins, incredulous at their blase attitude to abandoning their homes which could, as was cheerfully explained in 1385, be raised again in a day.

South of Dunbar the Lammermuirs meet the sea at St Abbs Head, and the links country and sandy beaches give way to seacliffs and tight, rocky harbours. The coast displays rock strata at crazy angles, inspiring James Hutton in his theories of the age of the earth. Under the sea, cathedral-sized rockforms and coral beds make it one of the best places in the country to scuba dive. The biggest port, Eyemouth, remembers a terrible tragedy in 1881 when the entire fishing fleet perished in a storm within sight of the harbour walls. And then the border is crossed - with a fair amount of drama on the clifftop footpath - on the outskirts of     Berwick-upon-Tweed, England's most Scottish town.

Berwick-upon-Tweed
Sixty miles down the coast from Edinburgh, the Tweed enters the North Sea at Berwick. Now an outpost of Northumberland, Berwick was founded in 1124 as one of Scotland's first royal burghs. By the end of the 13th century it had become, through trade with other Northern European entrepots, the richest and most populous town in the country. Unfortunately Berwick was besieged by Edward I in 1296 and the entire population massacred. It spent the next few hundred years on the front line, swapping ownership several times (finally becoming English in 1482), and after such a battering never regained its former prominence.

The Scots, preferring guerrilla warfare, levelled castles - Roxburgh's fate - rather than see them fall into enemy hands. The English instinct was the opposite, and Northumberland is known as 'Castle County' after the sheer number of castles built to defend against marauding Scots. The most heavily fortified place of all was Berwick, its 16th century town walls considered a masterpiece of renaissance engineering, with arrowhead shaped bastions designed to rain fire on any direction. These town walls are still largely intact and form an interesting circuit.

Although accents change within a few miles, the border seems slightly artificial, the countryside and rural architecture the same on both sides. And why shouldn't they be? A long time ago this was all part of one kingdom,     Northumbria. No further excuse should be needed to loup the border and explore Northumberland, blessed with a lovely coastline and thick with amazing castles such as Bamburgh, Alnwick, Norham, Dunstanburgh and Lindisfarne. Follow the St Cuthbert Trail from Melrose (where the Lammermuir born Cuthbert came to prominence) to one of the most beautiful and atmospheric places in England, Holy Island, where he died in glory. Get the timing right with the tides, and you can walk across the sands to Holy Island all the way from Berwick.

Northumbria
In Roman Britain, Angle and Saxon mercenaries were paid to patrol the east coast and repel their Germanic compatriots from across the North Sea. But with the collapse of Rome the mercenaries dug in, and more and more people crossed the sea not to raid, but to settle. They were spearheaded by war bands who quickly deposed the native aristocracies. The first great Anglo-Saxon kingdom was Northumbria, stretching from the Forth to the Humber, headquartered at Bamburgh. At its 7th century height, it reached the Solway firth on the west coast, exacted tribute from Mercia, Dalriada, Strathclyde and southern Pictland, its kings styling themselves 'Bretwalda' - Rulers of Britain. It contributed great dark age art such as the Lindisfarne Gospels and the seeds of the English language. However Northumbrian power dwindled in the 9th century under Viking attacks and settlement, and in the 10th century it was squeezed between the nascent kingdoms of England and Scotland. At the Battle of Carham in 1018, Malcolm II annexed Northumbria as far south as the Tweed, which remains Scotland's border to this day. 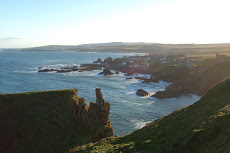 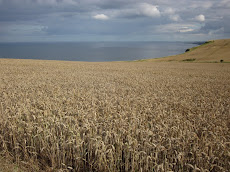 The Border town of Berwick 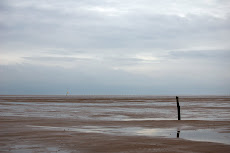