Ingibjorg is the most beautiful of women

Roman emissaries arrived at the King of Orkney's broch at Gurness and made the appropriate noises. Emperor Claudius was coming to conquer Britain, and it would be in Orkney's interests to submit. They brought gifts and tributes to sweeten the deal. Thus it was that the King of Orkney - alone amongst the Caledonians - was one of the eleven kings of Britain who paid homage to Claudius during his triumphal visit to Colchester in AD43. Orkney might have been on the edge of antiquity's known world, but it was no backwater ignorant of the world's currents, then as now.

Yet it is not for the classical age Orkney is known, but two other periods: the short, violent Viking age, and the vast span of prehistoric time. Orkney's concentration of prehistoric remains is unrivalled in Northern Europe. Her easily worked sandstone naturally forms slabs and flags and is an obvious building material on an island with few trees. It is the use of this stone which means Orkney today can boast such a richness of ancient remains. The area on west mainland from Skara Brae to Maes Howe is a UNESCO world heritage site, busy in summer with tours from visiting cruise boats and daytrips from as far away as Inverness. Skara Brae, Maes Howe, the Ring of Brogar and the Stones of Stenness become crowded during the day, but the locally-based can visit in peace in winter or during the long stretches of daylight on summer mornings or evenings. New prehistoric discoveries are regularly made all over Orkney, the most exciting today a vast temple complex between Stenness and Brogar which dwarfs any previous find.

The Viking age began in earnest in the 9th century. The ancestors of the Norman Invasion of Britain sailed from here to Normandy, Eric the Red (the first Viking in America) visited, and Orkney has its own Icelandic Saga. Early Viking Jarls based themselves at Birsay, whose earlier Pictish village on the Brough of Birsay had a strategic view along the entire coast from the Old Man of Hoy to Noup Head on Westray. But in the 12th century, St Magnus' cathedral was built in Kirkwall - one of medieval Norway's finest buildings, whose simple Romanesque columns and weather-beaten stones exude an impression of great age and character. Around this red sandstone church a town grew, in a more central and sheltered location than Birsay. Kirkwall today hosts half of Orkney's population, its position as Orcadian capital secure. But for character try     Stromness, Orkney's only other town.

Stromness
Stromness - Hamnavoe to the Vikings - has been the jumping off point for thousands of bluewater sailors, whether whalers, Hanseatic merchants, Napoleonic warriors or trappers and traders in Canada. The Hudson's Bay Company was largely staffed by Orkneymen, whom the directors found hardier, cheaper, more self-sufficient and trustworthy than the rest of Britain's sons. Stromness' days as a major port are over, but the unique houses remain, gable on into the sea, protecting Stromness' narrow, sinuous main street from the buffeting wind.

Between Kirkwall and Stromness lies Scapa Flow, an immense anchorage sheltered by surrounding islands. It was a major naval base in the Great War and Second World War, home to the 160-odd ships of the British grand fleet in 1914. In 1919 52 vessels of the interned German fleet were scuttled without loss of life by her Admiral. These vessels today make Scapa one of Britain's most fascinating scuba diving venues. Scapa again became base to a British fleet in 1939, but distance from the Channel did not equate to safety. On 16 March, 1940, a number of Orcadians, including James Isbister, died in a Lufwaffe raid - the first British civilian casualties of the war. An even greater loss was HMS Royal Oak in October 1939, sunk by a U-boat with the loss of 833 lives. Causeways between the islands were built, leaving only two heavily-guarded entrances to the Flow. The construction work was done by Italian PoWs, who also built a remarkable chapel in a Nissan hut on Lamb Holm.

Windswept but well-husbanded, Orkney is one of northern Scotland's oases of fecundity. And you don't have to be in Orkney long to feel something unexpected. From the map it appears that Orkney should feel isolated, but the reverse is true; it is the rest of the world, and Scotland in particular, that feels cut off from Orkney. The hills of Hoy contribute to this, filling Orkney's southern horizon. Orkney has everything you might want from a Scottish location except mountains: history,     fine produce, friendly locals, wildlife, great beaches and seascapes; it even lacks midges! But Hoy makes up for any lack of general ruggedness with Orkney's biggest, bonxie-haunted hills, glaciated corries, a fine oceanic beach at Rackwick, and Scotland's best-known seastack, the 137m Old Man of Hoy. A hat is recommended when walking on Hoy in early summer, as any off-piste stravaigings will incur the wrath of nesting bonxies, large seabirds who aren't afraid to attack humans.

Orkney Produce
You could easily spend a gourmet week on Orkney, eating scallops and spoots one day, partan and mussels the next, then halibut or haddock, salted herrings, and brown trout. From the land there is beef, cheddar cheese and caboc, oats, barley, tatties and gamey North Ronaldsay lamb. The local ales are amongst the best brewed in Britain, not to mention the exclusive malt whiskies of Scapa and Highland Park. Orcadians have a sweet tooth too with fudge, tablet, shortbread and ice cream all produced on the islands. All this is making me hungry...

Orkney is an archipelago of 20 inhabited islands and more than double that number of offshore islets and skerries, and each island has its own character. Shapinsay is practically a commuter suburb of Kirkwall. Rousay hosts perhaps the most interesting short walk in Scotland at Westness, where in the space of a mile you can see seals, terns, a massive bronze age burial tomb, a broch, and a Viking settlement. Eday hosts experimental tidal power tubines and Stronsay has strange sea caves. Sanday consists almost entirely of beaches and dry, sandy soil (as well as Quoyness, a prehistoric chambered tomb to rival Maes Howe). North Ronaldsay feels remote, the seaweed diet of the local sheep giving their meat a gamey taste.     Westray and Papa Westray are connected by the world's shortest scheduled flight. All islands are connected to Kirkwall for shopping and services, but they come together in their own right in events like the inter-island games, where the beautiful Orcadian accent - my favourite in the whole British isles - is heard.

Westray
Westray provides a great case study of an Orcadian island. Its small but active town of Pierowall has a general store that sells everything, a top-class café, a museum that has hosted internationally significant archaeological finds like the Westray Wife, and a fishing fleet whose crab and scallops are sent across Orkney and beyond. There's a beautiful beach of pale sand at Grobust and a medieval castle at Noltland. The west coast is a wonderful rough walk along seacliffs and geos, and its small summit, 169m Fitty Hill, gives a great view across Orkney. It is probably also the easiest place in Britain to watch puffins, who live on the Castle o' Burrian stack at Rackwick. It is novel to see these birds - who normally live on uninhabited islands - with houses for a backdrop and cars passing in the distance.

The Old Man of Hoy - Scotlands most striking seastack

A sunken blockship at the Churchill Barriers 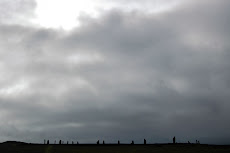 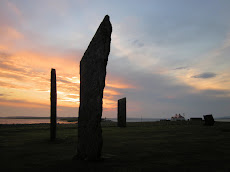 The Stones of Stenness

Building sandcastles from stone on Orkney

The neolithic village of Skara Brae on Orkney 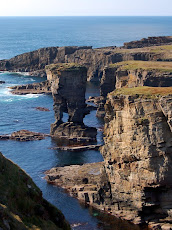 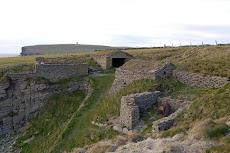 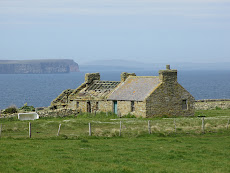 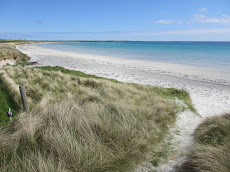 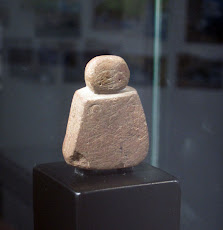