©1963 Jim McLean The Ballad of Glencoe

Charles waited at Glenfinnan. He had come from Italy to raise Britain for his father, the rightful Stuart king, and extirpate the Hanoverian usurpers. The Stuarts had moral support from several powerful lords, but it was well known that the overthrow of the incumbent king could not even be contemplated without at least, ooh, ten thousand well-drilled French troops and a vast pile of money. Charles had arrived in Scotland with only seven men and his personal charm. All but a small group of Macdonalds had rebuffed his approaches. But hark? Bagpipes! Charles' anxiousness turned to elation. Over the hill marched the clansmen of Cameron of Lochiel, whose sense of honour had been pricked by Charles refusing to return to France. He had responded to Lochiel's initial rejection by saying he would "rather be a fugitive and Lochiel could stay at home and read what happened to his Prince in the newspapers." Over the course of several days, Camerons, Clanranald, and Macdonnell of Glengarry gathered to the prince's banner at Glenfinnan. Charles had raised a thousand men. His     march to London was on.

The '45
The '45, Bliadhna Tearlach, Charles' Year, was an extraordinary endeavour. Fed up of various failed efforts to put his father on the British throne (his grandfather had been ousted by William of Orange), Charles landed in the West Highlands in July 1745 with just seven men, to the astonishment and dismay of all. His father had enjoyed some support in 1714-5, but a refusal to renounce Catholicism meant he would never enjoy the throne of Protestant Britain. Things had only deteriorated for the Jacobite cause since. Yet there remained some residual loyalty to the old dynasty, especially in the north of England and Scotland. In Scotland there was an added edge through dissatisfaction with the union of 1707, either due to the increase in taxation, the loss of status of Episcopalians to Presbyterians, or the loss of Scottish nationhood. The majority of Charles' supports came from the Episcopalian north-east of Scotland, but it is for the plaid-clad West Highlanders the army is best known.

Despite arriving with only seven men, Charles raised five thousand and took Edinburgh, routing a similarly sized Hanoverian force at Prestonpans. Charles' Scottish support was happy to take Scotland alone, and counselled consolidation. But it was all or nothing for Charles. After a several weeks in Edinburgh gathering more support, his army left Scotland in October for London.

Meanwhile the Hanoverians were caught on the hop. The bulk of the British army was fighting in Flanders and its recall took several weeks. General Wade returned with ten thousand to Newcastle, preventing north-east England from rising. The king sent his family to the safety of the south coast and prepared his defence of London on Finchley Common. And the Duke of Cumberland with another ten thousand marched through the Midlands to meet the Jacobites, who were marching south via Lancashire. The lightly-laden Jacobites outmanouvered Cumberland's larger force, reaching Derby on 4 December. But they were painfully aware that - with but a few exceptions - England had not risen for Charles, and there was no word from France for any backup. Their early success and speed of advance had taken everyone on both sides by surprise. On 5 December, with London in a panic and France just gearing up to send an invasion fleet, the fateful decision was made by the Jacobite command - who, as Scots, were really only interested in taking Scotland - to turn back. Charles lost heart and fell into a depression. Without the element of surprise, the Jacobites surrendered their one advantage.

Lochaber is the roughest and most intractable part of the Highlands. As the rest of the country converted to various flavours of Protestantism, Lochaber remained loyal to the old faith of Rome. Arable land is scarce and cattle droving lay at the heart of the economy, and into the 18th century neighbouring clans complained of cattle rustlers, of the thieves roads across the empty wastes of Rannoch Moor that they didn't dare cross. The MacIains hid their booty in Coire Gabhail, Glencoe's Lost Valley. To deal with the Highlands the government of King William decided to make an example of the MacIains, who had taken part in the first Jacobite rising of 1690. This is remembered as the     Massacre of Glencoe.

The Massacre of Glencoe
Unbeknownst to themselves, the MacIains were singled out by John Dalrymple, Secretary of State in Scotland, as an example pour encourager les autres. In February 1692 a troop of 120 under the command of Campbell of Glenlyon were sent to Glencoe and were received with warm hospitality. The soliders stayed in the homes of the clan. Two weeks later Campbell received orders, signed by the king himself, that he was to kill the entire clan. Some of his men baulked at the order and allowed people to escape. 38 were killed and another 40 died of exposure after their houses were burned. Despite a general antipathy to Highlanders, the rest of the country was outraged at this flagrant breach of trust and hospitality. An inquiry in 1695 found Dalrymple guilty of murder, but he was protected by the king and lost only his job. The massacre was far from the greatest outrage perpetrated in the Highlands, but the usurpers of James VII were never popular in Lochaber, and nothing could be more inclined to harden West Highland hearts against King William than this massacre.

Rannoch Moor is an inhospitable place. One of many 'roads to the isles' crosses it, connecting the Lowlands with the Hebrides. The most famous today is a path for the strong walker, 'by Tummel and Rannoch and Lochaber I go.' Around Ben Alder and Rannoch Moor is wild and roadless country. One does not need to worry these days about thieves, bandits and walking cattle to market; just midges, rain, and     ghosts.

Tales of Rannoch
Like the Cairngorms, Rannoch Moor is full of ghosts. The Cu Saeng, a monster so horrible that anyone who saw it died instantly, flitted about these hillsides, as did witches who could turn themselves into animals and became vampires when they were killed. Stories like these are told all round the world by mothers keen to keep their children away from dangerous places, and Rannoch Moor is inhospitable enough without the bandits and exiled clansmen who hid out in Rannoch in renaissance and later times. Rannoch is not, like other moors, an elevated plateau, but a boggy, loch-spattered bowl surrounded by higher hills. A road skirts its western edge and a railway runs through the middle, floating on brushwood rafts for part of the way - a triumph of Victorian engineering, and a scenic tourist route today.

At the western end of Rannoch Moor a great rocky pyramid rears up from the plain like a child's drawing of a mountain. This is the Buachaille Etive Mor, sentinel at the entrance to Glencoe. Massacre apart, Glencoe is famous for its steep scenery, great hillwalking and rock climbing. The Buachaille, Bidean nam Bian, the narrow crest of Aonach Eagach and the Blackmount range rank amongst the finest hills in the country, and the northern slopes of the Blackmount host Scotland's oldest ski centre.

Lochaber has endless walking and climbing opportunities on its mountains, two ski resorts, an indoor ice-climbing wall in Kinlochleven, fast flowing rivers such as the Orchy, Etive and Nevis that are the delight of sports kayakers, deep freshwater lochs like Loch Morar and Loch Lochy, yachting berths on the coast, forest tracks for mountain bikes, and two long distance trails. It is no wonder the bustling town of     Fort William bills itself as the 'outdoor capital of the UK'. The Fort sits at the base of Ben Nevis, Britain's highest hill at 4,416ft (1,346m). Low by global standards, Highland hills should not be underestimated, due to fierce and changeable weather and a general lack of signposted paths. Ben Nevis's summit is shrouded in cloud for 300 days a year and receives 4m of rain annually. It appears as a great lump from the south or west - the approach taken by the tourist path - but a walk round to the north reveals 2,000ft (600m) high cliffs. My favourite route to the summit of Ben Nevis starts from the road end in Glen Nevis, takes in the Nevis gorge, Steall waterfall, Carn Mor Dearg, and the Carn Mor Dearg arête - though you should have a bit of hillwalking experience before undertaking this route, which is steep and pathless after Steall.

Fort William
Fort William started life as a 13th century stronghold called Inverlochy, a couple of miles from the modern town. It was besieged twice, in 1431 and 1645. In the 17th century Cromwell had a modern fort built that could be supplied by sea. This was the wildest part of Britain and soldiers posted here must have felt as isolated as in any fort in the American west, surrounded as they were by hostile clansmen, who tried to take the fort in 1746. Fort William became just one in a chain of forts built by the British government to pacify the Highlands in the aftermath of the Jacobite rebellions, barracks appearing at Ruthven, Glenelg, and forts along the Great Glen at Fort Augustus and Fort George. Today An Gearasdan - 'the Fort' - is an unattractive but highly convenient tourist hub.

From Ben Nevis, you head west to increasingly attractive scenery. The hills become rougher and more complicated, the coast is indented by steep-sided, narrow sealochs, and the islands of the Hebrides reveal themselves. The Glenfinnan viaduct - famous from the Harry Potter films - conducts Britain's most scenic railway towards the coast. We are in Jacobite country, where Charles Stuart landed on the British mainland for the first time and raised his standard at Glenfinnan. It was from here too he left for France a broken man, leaving the Highlands to their     fate.

End of the Jacobites
After defeat at Culloden, Charles became a fugitive. Rejecting his general's plans to fight a guerrilla action, Charles sought only to escape back to the Continent. He became 'the Prince in the heather,' spending the summer of 1746 criss-crossing the West Highlands in a successful attempt at evading government patrols. He narrowly avoided capture on a couple of occasions, rowed to the Uists and back, and holed up in caves in remote country with loyal followers. £30,000 was offered for his life yet nobody betrayed his presence. On 19 September 1746 he rendezvoused with a French frigate in Loch nan Uamh and sailed away, never to return. British reprisals in the Highlands were savage. After the Jacobite rising of 1715, Scots had managed the aftermath and were lenient to the main offenders. There was to be no leniency after 1746. The government realised that peace would only come if the Highland way of life was destroyed. British soldiers were sent across the West Highlands burning and looting, and even clans loyal to the government were not to be immune from punishment. The carrying of weapons was banned, as were tartan, kilts, bagpipes, and large gatherings. It was not until 1782, after Highland regiments had proved themselves loyal in Britain's imperial wars, that tartan could be worn again by the common people.

A knowledge of history is not necessary to enjoy the area, however. The scenic splendours are more than enough. The whole coast around Arisaig provides a great outlook over pale, sandy beaches to the mountainous islands of Rum, Skye, and Eigg, and the views from the coastal hills are superb. At the fishing port of Mallaig you reach the end of the 'Road to the Isles,' and can look forward with anticipation to the Hebrides, the jewels in Scotland's scenic crown. 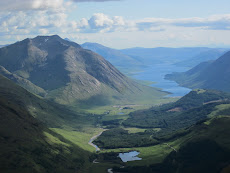 Glencoe is a paradise for scramblers

On the Aonach Eagach

The islands of Loch Morar 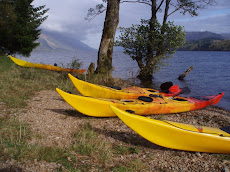 Rum from Arisaig - the end of the road