The legend of Aberdonian meanness

Oil changed Aberdeen. Before the 1970s it was not much more than a substantial county town and fishing port. But when deindustrialisation and unemployment hit the rest of Scotland, a boom began in the north-east that is yet to end. The bars and clubs of central Aberdeen roar with activity every day of the week as oilies from Scotland, Newcastle, Brazil, the American South - and beyond - carouse and seek carnal pleasures. Choppers buzz in and out of the busiest heliport in Europe and oil support vessels queue for a slot to enter Aberdeen harbour. Onshore, material pleasures fill the minds of ordinary families with above-ordinary household incomes. The oil won't last forever, but the city and its thought patterns have been marked by it for good. Where else in the country will you overhear phrases like "he's only my boyfriend on Tuesdays," or "does it normally cost fifty bucks for a blowjob in this town?"

Aberdeen may be the earthiest, but it is also the cleanest city in Scotland, unique in being constructed almost entirely from one stone, a grey, incorruptible granite. Reflective minerals in the rock mean the granite city glints with silver in sunshine, which is more frequent than you might expect. Handsome Victorian buildings line the streets of central     Aberdeen, and, while only a few individually are of national importance, the architecture of the city as a whole has a very pleasing unified effect. I have always liked Aberdeen after getting my first decent job here. In the midst of all the quick-tongued incomers Aberdonians are perhaps a little more reserved and slow than in, say, Glasgow, but they are the most honest, hard-working, and quietly self-confident people in Scotland.

Aberdeen
Aberdeen has two main areas of interest. The first is Old Aberdeen near the mouth of the River Don; with St Machar's Cathedral, the university, and quaint medieval houses. The other is the city centre around the harbour at the mouth of the River Dee. Aberdeen has a fine beach but the town turns its back on it, preferring to huddle round the docks instead. The architecture is grandest along and near Union St, with Marischal College, the second biggest granite building in the world after l'Alhambra in Spain, fretted with gothic tracery - an unexpected use of granite, the hardest of all stones to work. There is a third, curious area of interest. Right at the end of the docks - surrounded by storage tanks, warehouses and modern ships - sits Footdee, an isolated old village in the midst of industry.

Most cities sit on one river. Aberdeen has two, the Dee and the Don. Whilst the gentle Don wimples its way through rich rolling farmland, the Dee is a different beast altogether, leaping over crags from its source in the high Cairngorms to dash furiously down to the sea by the shortest possible route. 'Bonny Don yearly takes none,' goes an ancient rhyme, 'but Bloodthirsty Dee yearly needs three.'

Deeside's prosperous commuter satellites give way within a few miles of Aberdeen to wilder scenery. At Loch Kinord between Aboyne and Ballater the Dee crosses the Highland line. Upstream are the forests and crags of     Royal Deeside. Queen Victoria's royal seal of approval led to a fashion for all things Highland, the apogee of which was the kilted     Highland soldier. At Scotland's coldest town, Braemar, the highest road in the country bends south over the Mounth for Perthshire, whilst west, the roadless River Dee dashes from the fastness of the Cairngorms.

Royal Deeside
Touring Britain, Queen Victoria and her new husband Albert fell in love with the Highlands and decided to buy a sporting estate. They were put off from their first choice - Ardverikie in Lochaber - due to the wet west coast climate, and in 1852 ended up at Balmoral in the drier East Highlands. From then on they spent every August at Balmoral, and for the first time since James VI left for London in 1603 Scotland saw her monarch on a regular basis. Once the Highlands gained the royal seal of approval, everybody wanted to buy a sporting estate and be the monarch of their own bit of glen. Aristocrats and industrialists headed north for shooting trips on the steadily improving rail network, and vast swathes of the Highlands, trapped in a semi-feudal land system, were given over to upper-class play. Scottish Baronial architecture sprang up even in cities, a style aping the remodelled Balmoral Castle which itself was based on the earlier castles of the north-east. As Highlanders themselves deserted the old country in droves for Canada, USA, Australia and the Lowlands, the cult of the Highlands -as seen through various romantic filters - could not have been more fashionable in the second half of the 19th century. Today Balmoral remains in royal hands as one of the best-run sporting estates in the country, from the fishing beats on the Dee to the crags and high plateau of Lochnagar.

Highland Regiments
Kilt swinging and marching to bagpipes, the Highlander was fierce to enemies and gentle to friends, a loyal, hardy, brave noble savage, the shock troops of the British Empire. Whatever the accuracy of this image it stuck in the hearts of Victorian Britons, and when men today wear kilts at weddings and dances they are unconsciously remembering the virility of these 19th century soldiers who helped Britain conquer a quarter of the globe.

The River Don to the north presents a different aspect. Rising in heathery foothills, the majority of the castles in Aberdeenshire's castle trail line its banks or sit in its catchment. Castle Fraser, Fyvie, Kildrummy, Craigievar - some of the finest buildings in Scotland and, to some, Scotland's one unique contribution to world architecture. The Don winds around     Bennachie. Celebrated in song and legend, it is Aberdeenshire's most prominent mountain. It may be less than half the height of the Cairngorms, but its isolated position and summit tors make it a landmark for miles around. From the summit, the whole of Aberdeenshire opens up - the Mounth south, Cairngorms west, Aberdeen east, and patchwork fields all the way north to another small but prominent landmark, Mormond Hill.

Bennachie
Bennachie hums with history. Rising out of the heavy earth and woodlands of old Pictland, surrounded by prehistoric monuments, its most prominent tor is called Mither Tap - Mother Top. The summit tors have been fortified at some point in the prehistoric past and Donside's recumbent stone circles - a 4,500 year old style of monument unique to Aberdeenshire - look to Bennachie as a focal point. The AD87 battle of Mons Graupius, where the Romans finally faced and defeated an army of Caledonians, is thought to have been held in the vicinity. However the oldest monuments in the area are on Deeside - a 10,000 year old astronomical calendar built by hunter-gatherers in the grounds of Crathes Castle, and a 6,000 year old, 26m long timber hall near Aboyne with the oldest evidence so far in Scotland of agriculture. Genetic evidence from 6,000 years ago reveals a sharp change in male DNA, indicating that the arrival of farmers from the continent took a terrible toll on the hunter-gatherers capability to reproduce - mute witness perhaps of an ancient genocide.

To the north of the Don at Cruden Bay sits the rambling ruin of Slains Castle, which local legend insists inspired Bram Stoker to write Dracula. Perhaps he was also taken by the similarly gothic Bullers of Buchan, a strange coastline of collapsed seacaves and stacks just to the north. The rest of the Aberdeenshire coast consists of long beaches, neat cliffs and insular fisher touns. Many of these are picturesque but the quaintest is Crovie, a single-street village wedged so tightly between sea and cliff that there is no room for a road. It is connected to nearby Gardenstown by a fine coastal path. The fishing folk are a breed apart, their work dangerous, uncertain but lucrative, with the UK's largest whitefish ports at Fraserburgh and Peterhead. Boats often arrive back to port in the middle of the night, and the harbourside auction houses open early, humming with activity and aroma under arc lamps. Trucks drive off with the purchased catch and the fishermen, proceeds of the last fortnight's efforts lying heavy in their pockets, disperse to families or early-opening bars. By dawn, all that remains are seagulls scavenging remains on the dockside. 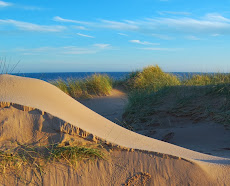 The granite tracery of Marischal College 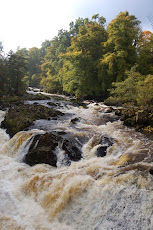 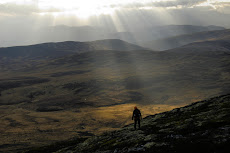 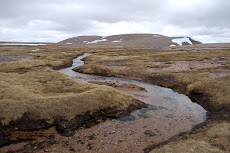 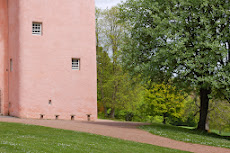 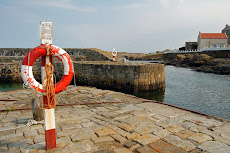