I fought at land
I fought at sea
At hame I fought my auntie-o
But I met the devil and Dundee
On the Braes o' Killiecrankie-o!

Nobles arrived from all over the kingdom for the ancient coronation ceremony of the King of Scots, each bringing a sod from their own estates to stand in the open air on the mound of Moot Hill. The Lia Fail - Stone of Destiny - was brought out from its chapel and placed on top of the mound. MacDuff, Earl of Fife, was honoured with the task of crowning the king, then standing behind him holding the sword of justice. The man being crowned, a descendant of the Cenel nGabhrain family of Dalriada and of     Pictish kings, sat on the Stone of Destiny holding the white wand of wisdom, whilst a bard recited his genealogy all the way back to Fergus Mor Mac Erc, 6th century king of Dalriada, and back further still into the realms of mythology - to Scota, daughter of the Pharaoh of Egypt during the time of Moses. As the crown was placed on his head, the shout went up - "Benach De Re Albanne!" - God bless the king of Scots!

The Picts
'Picti' was the name given by Roman sources in the 3rd century to the people who lived north of the Forth. They painted their bodies with tattoos long after becoming démodé in the rest of Britain, and were feared in the south as pirates and barbarians before and after the collapse of Roman power. They left no written records and so everything known about them comes from Roman, Irish, Welsh and Anglo-Saxon sources. Everything except their magnificent carved standing stones: concentrations are found in Strathmore, Aberdeenshire, and Easter Ross. Their name and language disappeared after the Gaelic takeover of the Scottish throne in the 9th century, but their genes live on - Scotland has more redheads as a proportion of the population than any other country.

Before Edinburgh was settled on as capital in the 15th century, numerous towns such as Stirling or Dunfermline held the king and his peripatetic court; but Perth was the favourite site. At Scone palace in Perth, the Scots had their talismanic coronation stone, the     Stone of Destiny. Though unimpressive in appearance, this stone on Moot Hill is the omphalos of Scotland, brought to Scone from Argyll in 843 when the Gaelic Kenneth MacAlpin united the Dalriadan and Pictish crowns. He built a palace at Forteviot, moved the bones of St Columba from Iona to Dunkeld, and within fifty years the kingdom was being known by a new name - Scotland.

The Stone of Destiny
By the middle ages the Stone of Destiny had acquired a long and distinguished mythological history, being in legend the very stone from the Biblical story of Jacob's pillow, brought from Egypt through Spain and Ireland by the Scots' ancestors to finally rest at Scone. The stone had further properties, being said to wail when the true heir to the throne sat upon it. It was also said that whoever held it would rule the Scots. It was with such magic in mind that the English Edward I took the Stone of Destiny away to London in 1297, after invading Scotland at the start of the Wars of Independence. It remained in Westminster Abbey until Christmas 1950, when an audacious group of four students from Glasgow University broke into the Abbey and re-appropriated it. A huge police search followed, the bishop was enraged, and the king himself was worried - there would have to be another coronation soon, and would it be valid without the Stone of Destiny? Such was the stone's power. The ordinary people laughed at such a cheeky raid and eventually, with the police closing in and the students afraid of jail, the stone reappeared overnight in the symbolic surroundings of Arbroath Abbey, where the Scottish declaration of independence had been signed in 1320. There was no trial of the students, as the establishment decided it would be against their best interests to open the can of worms which was the matter of the legal ownership of the stone.

The stone was returned to Scotland in 1997, in a publicity exercise by a unpopular Conservative government keen to curry favour with the Scots. Two years later, Scotland regained a limited parliament after 292 years. Perhaps there was magic in the stone after all?

But the twist in the story is that the stone in Edinburgh Castle is perhaps not the Stone of Destiny at all. Early records described it as being made of black marble (possibly volcanic rock or a meteorite) and carved with inscriptions. The Stone of Scone is a nondescript doorstep of sandstone that matches rocks from a quarry near Perth. It is speculated that, with Edward I approaching, the original stone was hidden in a safe place in the Perthshire hills, and a worthless lump of sandstone was put in its place. Edward was fooled, but in all the fighting that followed, the monks who knew the secret died without being able to pass on the location of the real Stone of Destiny. So next time you are walking through Perthshire, and come across a strange, carved block of stone...

At the heart of this new country is Perth, on the highest navigable point of her greatest river. Quality of life surveys occasionally conclude Perth's is the best in Britain, when factors such as employment, amenities, neighbourliness, services and surrounding beauty are taken into account (as opposed to just house prices). Perthshire has a little bit of almost everything, and bills itself as 'Scotland in one county.' Rolling hills, beautifully wooded rivers, sheepwalks, sporting estates, arable farmland and douce wee towns form the Perthshire scene.

Perthshire is prime sporting country. The Rivers Earn, Tay, Tummel, Tilt, Garry, and Isla are full of salmon, Lochs Rannoch and Tay with brown trout, the heathery hills of Atholl with grouse and the wilds of Rannoch with red deer. If you prefer your sport less visceral, whitewater rafting and bungee jumping are provided on the Tay and Garry, and the Caledonian Etape is the only bicycle race on the British mainland where public roads are closed to other vehicles. Perthshire has more Munros than any other old county, and single-track roads wind their dead-end ways through the green miles of Glen Lednock, Glen Lochay,     Glen Lyon, Glen Tummel, or up over the passes of Drumochter and Glen Shee to Badenoch and Deeside. The whole of Perthshire is magnificent walking country, making up for its lack of seascapes in accessibility, variety and wildlife. And while Moot Hill is nothing special to look at, the same can't be said for Shiehallion, a singular peak in the Perthshire Highlands at the very centre of Scotland. The name translates as 'fairy-mound of the Caledonians' after the Caledones of Perthshire, whose fierce encounters with legionnaires led Rome to name the whole of Britain north of Hadrian's Wall 'Caledonia'. The military tradition continues to this day, and the Black Watch, one of Britain's most famous regiments, has its roots in the area.

Glen Lyon
At first glance, the longest glen in Scotland it is just another glen, but it has a fascinating history, starting with the Fingalian warriors up to 2,000 years ago who built a number of stone forts (now vanished) and whose base this was. At spooky Meggernie castle, a legless ghost hovers round frightening guests, victim of a 16th century murder. And Fortingall, an old village of strangely misplaced thatched cottages, Saxon in appearance, has two claims to fame - the oldest tree in Europe, a 3000 year old yew, and the supposed birthplace of Pontius Pilate, the Roman governor who sentenced Jesus Christ to death. At the very head of Glen Lyon, a stiff walk from the end of the road, sits a strange relic from time immemorial - the Caillich and her brood. This is a family of strangely shaped stones, living in a miniature stone house, built by local farmers hundreds - or even thousands - of years ago. In a pre-Christian spring ritual, they are brought out of their house to watch over the animals at their summer grazings, and in autumn they are given a harvest offering, and put back into their house for winter. As far as I know, a local shepherd continues this tradition to this very day.

In a country with few trees, Perthshire bucks the trend. From some of the tallest in Britain at the Hermitage and Blair Atholl, to some of the oldest, such as Fortingall's yew: the world's tallest hedge at Meikleour, or trees famed in poetry such as the Birks of Aberfeldy or the Falls of Bruar. Perhaps most famous is Birnam Wood, which Shakespeare had marching to Dunsinane in Macbeth. The oldest tree in Birnam Wood is the Birnam Oak, easily old enough for Shakespeare himself to have sat underneath it. And why not? After all, a troupe of English theatre-players is known to have visited the area in the 16th century...

Composer Dougie Maclean lives in Dunkeld where he runs the Taybank, a gathering point for folk musicians. Once uncool, this form of music has regained credibility and popularity in recent decades. The folk music revival has gone hand in hand with a renaissance in Scottish culture and consciousness: it has moved from Stop Yer Tickling Jock and Donald Where's Yer Troosers to Mixolydian and the Fence Collective, via the Corries, Capercaillie, and Maclean. Today an increasing number of youngsters like and play folk music, attracted by the DIY social element of the ceilidh, where music and entertainment are self-provided and enjoyed by all generations.

Upstream from Dunkeld sits the Duke of Atholl's Blair Castle, set in parkland below heatherclad mountains. The Duke's Atholl Highlanders remain the only private regiment in Europe, given legal status by Queen Victoria after they mounted guard during her 1844 visit to Perthshire. Today they perform occasional ceremonial tasks, and they are armed - albeit with Great War vintage rifles. Between Blair Castle and Dunkeld is the beautifully wooded gorge of Killiecrankie, where a Covenanter army was ambushed by a Jacobite one in 1689 - leading to one of Scotland's finest old folk songs: The Braes o' Killiecrankie.

I fought at land
I fought at sea
At hame I fought my auntie-o
But I met the devil and Dundee
On the Braes o' Killiecrankie-o!

The Stone of Destiny, Moot Hill 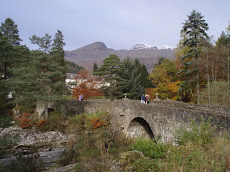 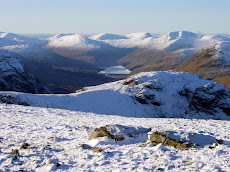 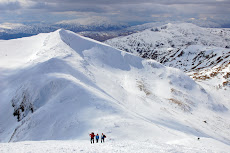 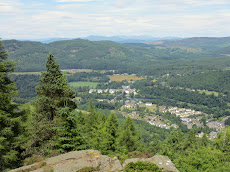 Blair Castle below Beinn a' Ghlo

Mountain Hare in Glenshee (can you spot him?)