With the rest of Scotland a boat ride away over the Firths of Forth or Tay, or a landward trail through the passes of the 2,000ft escarpment of the Ochils, Fife has retained a sturdy identity since being named a kingdom in its own right in the Dark Ages. "It taks a lang spoon," says the rest of the country, "tae sup wi' a Fifer." The western approach from Stirling is guarded by the beetling crags of the Ochils, birthplace of rushing burns that turned mill wheels in the early industrial age. Once up on the Ochils a walker or cross-country skier can stride out in magnificent hill country with views to the Highlands and Gleneagles, making gentle mockery of the name ‘The Lowlands'. Nowadays it is easy to reach Fife, the Ochils breached by the M90 motorway, the Tay bridged at Dundee, and the Forth at Kincardine and     Queensferry.

Queensferry
The Queens Ferry was instituted in the 11th century by Queen Margaret, who wanted a reliable passage between the castle of Edinburgh and the abbey of Dunfermline, where an ancient ballad says 'The king sat in Dunfermline toun, drinking the bluid-red wine'. There has been a castle and abbey - where Robert the Bruce is buried - at Dunfermline since at least the 11th century. Amongst the commuter suburbs, quaint old town centres remain - at North Queensferry, Inverkeithing, Aberdour, Culross, and Dunfermline.

Thanks to the Forth Bridge, the area around Queensferry is part of Edinburgh's commuter belt, but West Fife has a long history of its own as a hive of heavy industry. The coalfields have been exploited since the Middle Ages, and ambitious mine owners at places like Culross dug underneath the Forth. The nervous 16th century king James VI was convinced he was about to be assassinated on being shown round one mine, when he popped up a ventilation shaft to an artificial island in the Forth and suddenly realised how far away his bodyguard were on shore! Mining activity was especially intensive in the 19th and early 20th centuries, when working rights for miners were finally won. Born into the job and banned from taking other employment, coal miners were effectively slaves until as late as 1799, and women and children worked in mines through the 19th century. It is perhaps not surprising that West Fife remains to this day the only Westminster constituency to elect a Communist MP.

Today the deep mines are closed and south west Fife looks to Edinburgh. The same is not true for the self-sufficient communities of east Fife, whose picturesque fishing villages were once one of Scotland's economic powerhouses. From Largo round to St Andrews, limewashed houses in pastel shades and roofs of Dutch pantiles tumble down steep streets to crowd small harbours. Elie, St Monans, Pittenweem, Anstruther, Crail - taken together, probably the most attractive collection of vernacular architecture in the country. From the 15th to the 17th century, the Forth was Scotland's premier trading area. Edinburgh dominated customs, but from the shores of Fife came salt, coal, fish and trade with the Low Countries. This was home territory of Sir Andrew Wood, one of Scotland's few famous swashbucklers, and an admiral in the short-lived     Scottish navy. What a great place this is to visit in winter! When the rest of the country is gripped by dark, depressing rain clouds, the East Neuk of Fife is often clear, and winter sun makes for beautiful light conditions throughout the day.

Scottish navy
For a brief period round the turn of the 16th century Scotland had a professional navy of 38 ships, founded by energetic king James IV, who used it to bring the West Highlands to heel and protect Scottish merchants from English pirates. The pride of the fleet was the Great Michael, Christendom's largest ship, the modern-day equivalent of Scotland running her own nuclear powered aircraft carrier. All the woods in Fife were raided for her timbers, and she was so big that a new dock was built at Newhaven near Edinburgh as no existing harbour was large enough to take her. However the ambitious naval schemes of James IV did not outlast his death, and the royal fleet was sold after he fell at Flodden in 1513.

From Crail, a magnificent walk along the Fife Coastal Path takes you round the tip of the peninsula to one of the most interesting towns in the country, St Andrews.     St Andrews was the ecclesiastical centre of Scotland in medieval times - at one time it had the second longest cathedral in Britain - but the Protestant reformation swept hard through Scotland, and Taleban-like Calvinists destroyed the cathedral as a 'symbol of idolatory.' (Of Scotland's great religious houses, only Glasgow and Kirkwall cathedrals survived the Protestant purge.)

St Andrews
St Andrews was founded by monks led by St Regulus who, it is claimed, brought the bones of Jesus' disciple Andrew in a box to this coast. When their boat landed, they set up their abbey. (It seems more likely that an existing church at Kilrymont was renamed St Andrews by the Picts after the king invited monks from St Andrews abbey in Hexham to settle in Fife.) Over the years, St Andrews Cathedral became Scotland's senior church, and the emblem of St Andrew, a saltire, became the national flag of Scotland. The bishop had a castle with a unique siege mine and counter mine, and it was this castle that a group of Protestant radicals captured, killing the bishop. They were in their turn captured and enslaved by the Catholic French navy, and Scotland's most famous Protestant, John Knox, was himself a French galley slave for several years before being released.

You might think this would have triggered St Andrews' decline, but it was not to be. Some of the novel ideas scholars were bringing home from universities in France and Holland worried the upper echelons of the church, and so to reinforce orthodoxy it was decided that it was high time Scotland had her own universities. In 1411 the first was founded in St Andrews - and the university survived after the cathedral was burnt. A uniquely sociable and atmospheric place to study, the university keeps St Andrews a busy town, and today students make up a quarter of the winter population.

A university and a cathedral would be plenty for most small towns, but St Andrews has one further boast, as the home of golf - for it is here that the rules of the game are curated. In summer, when the students have gone, the town is thick with tourists, many of them golfers come to pay homage to the birthplace of their obsession. St Andrews certainly has plenty more to offer the tourist, with a couple of beaches, and the best pre-union architecture in Scotland after Edinburgh.

Away from the coast Fife is less interesting, being rolling, pleasant, but unremarkable farmland. This 'beggars mantle' - the boggy, pre-improvement farmland - was contrasted unfavourably by James VI with the coastal trade's 'fringe of gold'. Inland, where the Firth of Tay narrows to a bridgeable river, lies Perth. 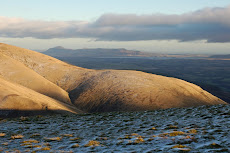 Looking to Fife from the Ochils 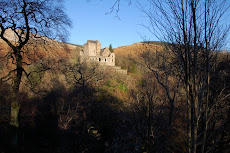 Castle Campbell in its Ochil eyrie

The well preserved village of Culross

Falkland - a holiday palace for the old Scottish monarchy

The ruins of St Andrews cathedral